Stretching at 9,500km2 The RUMAKI Seascape is the most important coastlines and adjacent marine territorial waters of three administrative Districts on the central-southern Tanzanian coast; namely Kibiti, Mafia and Kilwa. All three districts are South of Dar es Salaam. A project to strengthen these invaluable marine protected areas has been launched in Dar Es Salaam by the Deputy Minister for Livestok and Fisheries honorable Abdalla Hamis Ulega (MP)
Speaking at the ceremony that was attended by various marine and fisheries stake holders the Deputy Minister thanked WWF for its long time outstanding conservation leadership and technical support they provide. He said this specific project has come at the right time as the sea scape needs a lot of attention and work to bring it to the status it requires and benefit the people around it and the Tanzania economy as well. He insisted on the need to raise awareness about the project to the local communities so they take part in its implementation. “Today we gather here to celebrate  the future of RUMAKI Seascape which will gain a regional and global recognition as the first marine Man and Biosphere Reserve in Eastern Africa.  As much as we need conservation work to succeed we must also explain the socioeconomic gains communities will achieve as this is usually missing in most of the projects which lead to the communities going against some of them. I wish to appeal to every Tanzanian and development partner to support the Government's efforts to preserve and conserve the marine ecosystem for man and nature. Looking forward, environmental stability and secured provision of ecological goods and services will remain essential to attain sustainable development in Tanzania. They are cross-cutting underlying requirements to achieve The Nation strategic vision of  2025."

Speaking at the project launch WWF Tanzania Conservation Manager Dr. Simon Lugandu  said: " The strategic importance of RUMAKI Seascape has important ecological features that  harbour natural habitats, ecosystems and plant and animal species of tremendous local, national and international importance. The challenge facing the country, and its partners, is to find ways to encourage and support the sustainable economic development of coastal communities in order to alleviate poverty and eradicate hunger, while at the same time conserving the unique biodiversity found in coastal areas.
Thus, improved management of this important seascape is key to sustain  the ecological, social and economic development for the present and future generation”.

The project will ultimately facilitate the designation of the Seascape as a ‘Man and Biosphere Reserve’ by the United Nations Educational, Scientific and Cultural Organization – UNESCO.  To this goal the project will strive for a  stronger and strategic partnerships as well as political goodwill.  WWF is looking forward to compliment the Government on this important marine global policy agenda and strategies through this project."


The RUMAKI Seascape is the most biologically productive and diverse marine area in Tanzania and East Africa. It includes 25% of Tanzanian mainland’s nearshore waters supporting substantial fisheries production; 26% of its coral reef habitat (625 km2); and over 50% of its mangrove forest (532 km2). Marine resources within the seascape support the food security and livelihoods of over 300,000 plus coastal residents. The area was designated a Ramsar site in October 2004 and by 2006 the government developed an action plan in order to improve the monitoring and management of the Ramsar Sites in the country. The measures include mangrove conservation and restoration initiatives.

Deterioration in the RUMAKI   ecosystem has impacted major natural assets and development investments around coastal waters of Tanzania. If unsustainable exploitation of this marine ecosystem continues, it will only be a matter of time before the entire ecosystem is irreversibly damaged with significant socio-economic consequences at national and regional reach.

While climate change may be a major contributor to the current crisis, the destruction of the seascape due to unsustainable fishing and mangrove harvesting practices among other things, has reduced the ability of marine  ecosystem to cater for life under water, absorb or reduce the impact of climate change and increasing the vulnerability of the people. Hence, the project to improve management effectiveness in the marine coastal areas is launched at a time when Tanzania works to maintain and improve its marine ecological value and livelihoods of the people. 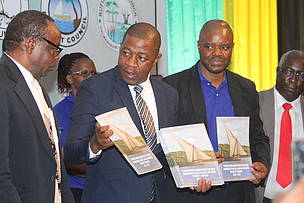 "Here is the project document, make it a success" seems to say the Deputy Minister for Livestock and Fisheries hon. Abdallah Ulega (MP) following the launch of the BAF funded project in Dar Es Salaam
© Diana Shuma 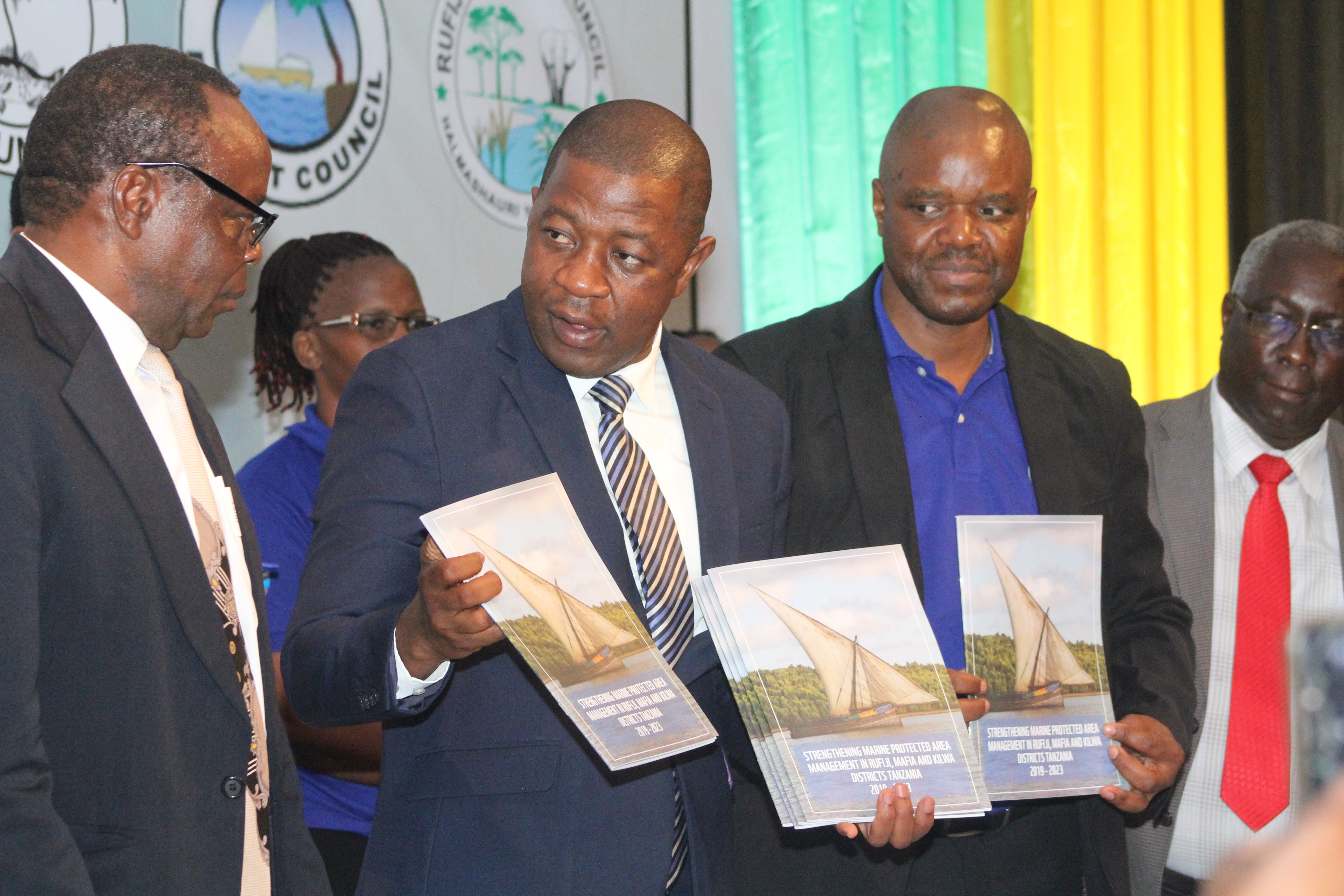