WWF and the International Rhino Foundation (IRF) recently donated 120 cameras to the park, bringing the total number of camera traps to 160.


The need to have additional video cameras for rhino observation was first recognized during an IUCN Asian Rhino Specialist Group meeting at Cisarua, West Java in March when the head of Ujung Kulon National Park presented the positive results of Javan rhino identification in 2011, when the park officially began using video camera traps. That year 35 individuals comprising of 22 males and 13 females were identified.

Experts believe there are fewer than 50 Javan rhinos remaining.

Coordinator of WWF-Indonesia’s Rhino Conservation Program, Adhi Hariyadi said: “By integrating video information gathered from camera trap with DNA based monitoring, we can get a better description of the Javan rhino population, and an even deeper understanding of rhino behaviors.”

“With the total of 160 video camera traps placed simultanously around the park, we can collect various information, not only on javan rhino but also other wildlife,” said Moh. Haryono, Head of Ujung Kulon National Park Office.

“The video can even monitor human activities inside Javan rhino habitat in Ujung Kulon. This information serves as an important basis to increase Javan rhino population in Ujung Kulon, which is in line with Indonesia’s rhino conservation strategy and action plan.” 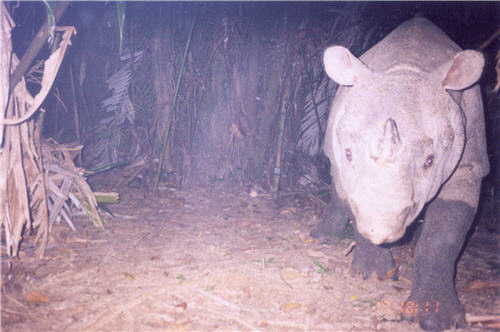 The Ministry of Forestry has set up nationwide targets to increase the populations of 14 endangered species by three percent by 2014.

The success of this target will be measured by the primary work indicator, a guideline developed by the Directorate General of Forest Protection and Nature Conservation of the Ministry of Forestry. Currently a roadmap is being developed to provide a systematic guideline for all stakeholders to participate.

Biodiversity Conservation Director at the Ministry of Forestry, Novianto Bambang Wawandono said: “One of the primary activities developed by the Ministry of Forestry to achieve this target is to monitor populations of specific species such as Javan rhino in its in situ habitat. These 120 additional units of video cameras will help efforts to increase Javan rhino population by three percent.”

Since the 1990s, WWF has been working with Ujung Kulon National Park to observe the Javan rhino population using camera traps.