Adelaide is widely cited for its comprehensive approach to sustainability. The city has a Carbon Neutral Action Plan, a Green City Programme, a 3-million tree programme, solar energy, and sustainable transport promotion, an Office of Cycling and Walking, and climate-change adaptation measures like water reuse. Four wind farms helped jumpstart its efforts.

How did Adelaide, the state capital of South Australia, get to be one of the country’s most liveable cities? The answer is, in part, the many different organisations working for similar sustainable goals. Adelaide is located in the Adelaide-Mt Lofty Ranges (AMLR) Natural Resources Management Region, one of eight natural resource management regions defined by the South Australia state government. Its approximately 535,000 ha contains 50% of native plant species and 75% of native bird species of South Australia.

Carbon neutrality
Adelaide has both a Green City Programme and a Carbon Neutral Action Plan for zero net emissions in buildings by 2012 and in transport by 2020 (see also Sønderborg and Växjö). Sustainable energy is promoted with combined heat and power, geothermal energy, energy audits, and smart meters, as well as incentives for solar energy. Early on, Adelaide was able to move rapidly from 0 to 20% renewable energy by establishing four wind farms. Adelaide’s 3 million trees programme is estimated to capture 900,000 tCO2 over the course of the trees' lifecycle. The city also has a coordinated approach for promoting and preserving biodiversity through guidelines for gardens.

Energy and transport
Solar energy is promoted through smart integration of solar photovoltaic (PV) panels into the built environment. In 2009, Adelaide began using solar panels to build the roofs of tram stops: these supply electricity for the stops and the city grid, in addition to providing shade and removing 90% of heat and 98.5% of UV light. It is estimated that the performance of the first 5 solar-roofed tram stops avoids 13 tCO2 per year of emissions. Sustainable transport is also promoted in Adelaide through a newly established Office of Cycling and Walking. Adelaide has rapidly increased bicycle parking, especially at railway and other transport stops, and the available kilometers of bicycle paths. Bus stops have also increased.

Water management
Australia is the planet's driest inhabited continent, and Adelaide is often cited for meeting threats to freshwater by passing a law in 2004 directing all households to have a water tank to harvest rainwater. In addition, the city’s treated wastewater is used for agricultural irrigation, a technique employed extensively in Australia [by one estimate, 28% of all effluent was reclaimed in 2001 (see also Hyderabad)]. Water scarcity strategies like reclamation and recycling are called source substitution.

Climate change adaptation
Water supply is a key focus of Adelaide’s regional work on climate change adaptation. With climate change, its Mediterranean-type climate is especially prone to a future drying trend, with less reliable rainfall, annually reduced by rates of up to 15% by 2030, shorter growing seasons and more extreme weather events and longer hot spells. Urban Adelaide’s supply of water from the Murray-Darling Basin (nearly 50%) is already in crisis, putting pressure on the entire region.

From 2005, Adelaide’s climate change planning is integrated with regional natural resource management. Measure include controls on biodiversity clearance, limitations on residential development, controls on water resources, and reductions of polluting agricultural forms (see also Auckland and Xeriscaping). During a 3-year period, the region has budgeted several million AUS$ to include climate change adaptation in biodiversity conservation, coastal management and continued research and development.

Centre for renewables
Internationally, Adelaide aims to be a global centre of excellence for renewable energy policy and research, attracting University College London to open an overseas campus there in 2009 with this focus. Similarly, Adelaide has gained support for its sustainability work from the regional and national government. 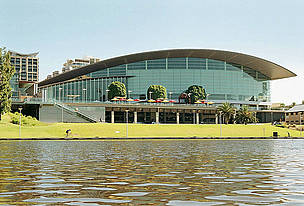 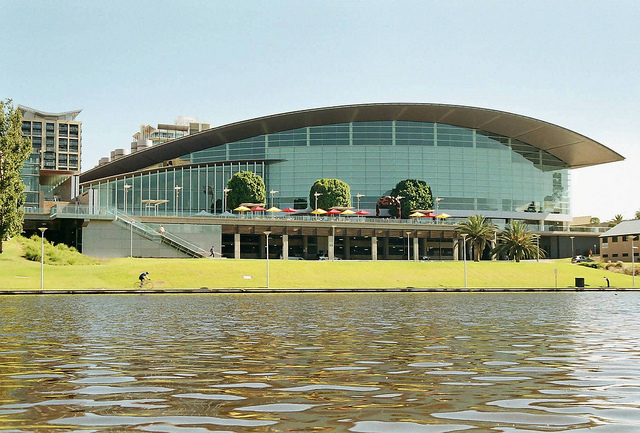 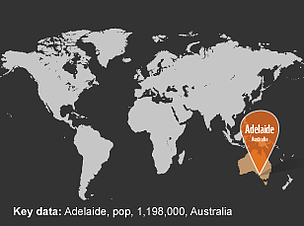 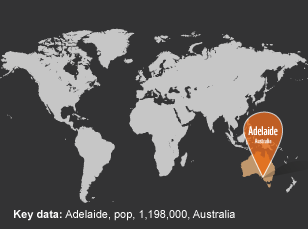