WWF and UN Habitat seek to accelerate existing efforts by empowering cities around the world to become Plastic Smart and Waste Wise, building cities’ capacity to eliminate plastic pollution by 2030.
9 February 2020. Abu Dhabi. WWF is delighted to announce an agreement between WWF-International and UN-Habitat. This is a new partnership between WWF’s Plastic Smart Cities initiative and UN Habitat’s Waste Wise Cities campaign aims to tackling plastic pollution in urban centres and tourism destinations.
60% of waste in our oceans comes from cities
An estimated 60% of plastic marine debris derived from urban centres, is carried to the ocean by rivers. While cities will rapidly increase their populace to account for two-thirds of the global population by 2050, they must urgently adopt smart solutions that reduce the collective impact of their prospering communities. This means preventing, minimizing and managing plastic. Many good examples and initiatives are already underway; WWF and UN Habitat seek to accelerate these existing efforts by empowering cities around the world to become Plastic Smart and Waste Wise, building cities’ capacity to eliminate plastic pollution by 2030. By joining Plastic Smart Cities, city leaders call on governments to introduce a global legally-binding agreement to stop plastics polluting our oceans.
Cities against plastic pollution
WWF and UN Habitat will partner to unleash the potential of cities to accelerate sustainable waste and reduce plastic pollutions. They will do so by sharing best practices and working with cities to improve sustainable waste management, collect waste data, organize training and capacity building programs and working towards global advocacy and awareness raising on plastic pollution. The agreement was signed by Maimunah Mohd Sharif, Executive Director of UN-Habitat, and Kavita Prakash-Mani, Global Conservation Director of WWF International.
WWF Plastic Smart Cities
Plastic Smart Cities is a WWF initiative, bringing together cities and tourism destinations to commit to fight plastic pollution. In just the last 12 months WWF has fundraised $40M USD to work on circular economy projects in cities in China, Thailand, Vietnam, Indonesia and the Philippines. Currently approximately 20 cities from around the world, including Donsol, Amsterdam, Oslo, Nice and Izmir, have committed to becoming Plastic Smart with the objective of No Plastic in Nature by 2030, to create a tangible action plan, to assign a pilot area within their city and sharing best practices on the platform.
UN Habitat Waste Wise Cities
UN-Habitat encourages all cities in the world to be Waste Wise; that means to be a city that uses precious resources wisely through rethinking, refusing, reducing, reusing and recycling (5Rs) its materials and waste before as well as after consumption. Waste Wise Cities Campaign aims to support cities and local governments in achieving waste Sustainable Development Goals, as well as implement the New Urban Agenda.
Best Practices Platform now officially open
At the signing of the partnership an online knowledge platform with best practices was  launched: www.plasticsmartcities.org. This launches the beginning of a long-term campaign to reduce plastic globally through sharing innovative, tried and tested solutions for those on the front line in the fight against plastic pollution.
Together we can stop plastic pollution
UN Habitat representative, Andre Dzikus, Chief, Urban Basic Services Section:
“Rapid urbanization coupled with accelerated economic development will result in an increase of municipal solid waste by 70% by 2050, creating a potential “time-bomb” regarding the waste we generate in cities. Currently, 2 billion people lack waste collection services and 3 billion people have no access to controlled safe disposal of waste. Addressing the global waste crisis must happen now. UN-Habitat is taking action through its Waste Wise Cities Campaign and by building global partnership to join forces to achieve waste Sustainable Development Goals. Today, I am very happy and proud to announce the partnership between UN Habitat’s Waste Wise Cities Campaign and WWF’s Plastic Smart Cities to tackle municipal solid waste management and therefore marine plastic pollution. This partnership aims at enhancing the capacities of cities to accelerate sustainable waste management and avoid plastic leakage in the environment, through the dissemination of sustainable waste management practices and sensitization to rethink waste and the way we produce and consume goods and services. Together we can beat plastic pollution and foster sustainable urban development”.
Vincent Kneefel, Global Cities Lead for WWF’s No Plastic in Nature initiative:
''With eight million metric tons of plastic entering our oceans each year, mismanaged plastic waste is profoundly threatening people and the environment, especially rivers and oceans. We are proud to partner with UN Habitat and to launch the Plastic Smart Cities best practices platform today. We are confident that through this initiative, together we can create a global movement of cities taking action to tackle plastic pollution and stop leakage of plastic into nature. Plastic Smart Cities and Waste Wise Cities campaigns will strengthen action when it comes to preventing, measuring, and managing waste at a local level. Our goal is to promote best practices around the world and to make sure that smart measures on plastic reduction and waste management are widely shared. With strong commitments from cities, governments and industry, we can end additional plastics in nature and ensure the safety of our communities and the environment.''
UN Habitat and WWF urge all cities from around the world to tackle plastic pollution and to join our movement. For more information please go to www.plasticsmartcities.org.
Key stats on plastic pollution:
For further information, contact:
Vincent Kneefel – WWF Plastic Smart Cities Lead.
Email: vkneefel@wwf.nl 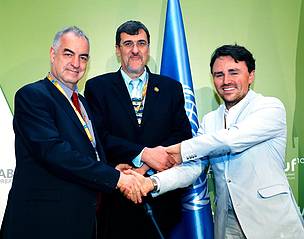 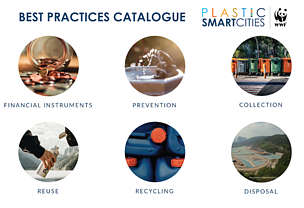 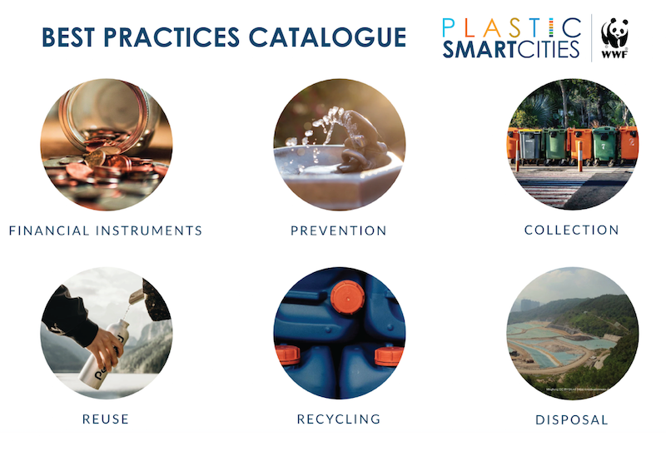