Presenting a review of scientific research on the Amazon and climate change, WWF says that climate-modelling studies are projecting a warmer and drier environment for the region, which will likely lead to a substantial decrease in precipitation over much of the Amazon. Such changes would result in significant shifts in ecosystem types – from tropical forest to dry savanna – and loss of species in many parts of the Amazon.

“A changing climate poses a substantial threat to the Amazon forests, which contain a large portion of the world’s biodiversity. Threats here translate into threats to biodiversity at large,” said Lara Hansen, WWF's chief climate change scientist. "The world needs to urgently evaluate vulnerability to climate risks and integrate them into biodiversity conservation efforts.”

According to the WWF survey, the combination of human activities – such as deforestation and logging – and climate change, increases the drying effect of dead trees that fuels forests fires.

In the absence of effective measures, global warming and deforestation could convert from 30 up to 60 per cent of the Amazon rain forest into a type of dry savanna, according to research carried out under the auspices of Brazil's National Space Research Institute (INPE).

The climate in northwestern South America, including the Amazon region, has already changed over the last century. For example, the average monthly air temperature records have increased by 0.5–0.8°C from 1990 to 2000.

“We are running a serious risk of losing a large piece of the Amazonian tropical forest,” said senior INPE scientist Carlos Nobre. “If warming exceeds a few degrees Celsius, the process of ‘savannisation’ may well become irreversible.”

Currently, the Amazonian forests act as an important sink for carbon dioxide (CO2), a gas emitted mainly from the burning of fossil fuels coal, oil and natural gas, and the major driver of global climate change. However, up to about 20 per cent of CO2 emissions stem from deforestation. If its destruction continues, the Amazon rainforest could become a net source of CO2, WWF says.

WWF believes governments should send a powerful political signal about the need to protect the world’s biodiversity and climate. At COP8, countries of the Amazon basin must announce quantitative commitments to reduce deforestation.

“Both the burning of fossil fuels and deforestation must be urgently and significantly reduced in order to save the world’s biodiversity and people from catastrophic climate change,” said Giulio Volpi, coordinator of WWF's Climate Change Programme for Latin America and the Caribbean.

“Here in Curitiba, there is a unique opportunity to address the deadly combination of deforestation and climate change. Amazon countries need to commit to stop deforestation, for the benefit of present and future generations.” 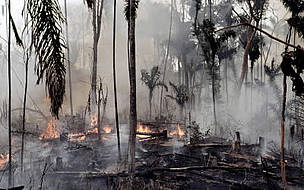 According to WWF, the combination of climate change and deforestation increases the drying effect of dead trees that fuels forests fires.
© WWF / Mauri Rautkari 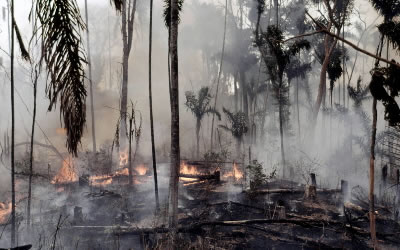 According to WWF, the combination of climate change and deforestation increases the drying effect of dead trees that fuels forests fires.
© WWF / Mauri Rautkari
Download
Climate Change Impacts in the Amazon: Review of the Scientific Literature
PDF 84 KB