Despite Bulgaria, Hungary, Slovakia, Romania and Ukraine being saturated with 1000 hydropower plants, 400 more are planned or under construction.
28 November 2019 (Brussels, Belgium) - The first ever European-wide inventory of hydropower plants shows rivers to be saturated with hydropower dams and thousands more on the cards. This is despite EU rules which should limit new hydropower plants. About 2,500 (28%) of all planned hydropower plants are in protected areas, the vast majority in national parks and Natura 2000 sites. The study also evidences an alarming rise in small hydropower, which usually wreaks environmental havoc whilst producing very little energy. With more than a third of European freshwater fish species currently threatened with extinction [1] -  of which hydropower dams are a key driver -  European rivers and their biodiversity cannot cope with the pressure of more hydropower.

Key findings: With thousands of plants in operation, Europe’s hydropower potential has already been harnessed. The study is released after a recent report from WWF and The Nature Conservancy revealed new hydropower to be unnecessary to meet global climate and energy goals [3].

The Danube catchment is becoming one of the most affected large river catchments not only in Europe but also worldwide. For example the Olt River, originating in the Carpathian Mountains, is covered by a long chain of hydropower plants. Numerous new projects are appearing. They include two large dams on the Lower Danube, which date as far back as the Soviet rule, and many new small hydropower projects in Ukraine. However, the environmental opposition against new dams is high. Some of the projects on larger rivers might be suspended such as those on the lower Drava, where the recently designated 5-country Mura-Drava-Danube Biosphere Reserve managed to change the narrative.

“Freshwater species populations are declining at twice the rate of terrestrial or marine species - and hydropower dams are a major pressure. Europe has a strong legal tool in the EU Water Framework Directive, but enforcement by the European Commission is weak, and implementation by Member States even weaker. The EU cannot claim to be a champion for biodiversity without putting this key environmental tool at the heart of its European Green Deal. It must invest in enforcement, eradicate the abuse of exemptions, and say no to more hydropower in Europe.”  - Andreas Baumüller, Head of Natural Resources at WWF’s European Policy Office

Key recommendations
In particular, we call on the European Commission to:  “This assessment is alarming. We are facing nothing less than the end of free flowing rivers in Europe, if we don’t stop this dam craze. Under the label of “green energy,” the hydro lobby and political decision-makers are about to destroy Europe's last remaining rivers and streams, and with it an enormous amount of plant and animal species. We don’t need any additional new hydro dams in Europe. Subsidies on hydro has to stop and nature protection must be improved.” - Ulrich Eichelmann, CEO of Riverwatch

“Based on extrapolations from my more detailed study on the Balkans, as well as the IUCN Red List, we can predict that at least 20 and perhaps up to 30 freshwater fish species would go extinct if all of these plans would be carried out. Furthermore, a large percentage (> 95%) of the southern European fish fauna would be placed in an IUCN threat category. We must understand that the already high demand for water resources, especially in southern Europe will be exacerbated by such large-scale hydropower exploitation, resulting in a deadly combination for freshwater biodiversity.” - Steven Weiss, Associate Professor at the Institute of Zoology, Karl-Franzens University of Graz, said

The study is released as the EU prepares its Biodiversity Strategy for 2030, taking a leading role at the 2020 Conference of the Parties to the Convention on Biological Diversity [3].

Strong law, weak enforcement
Under the EU Water Framework Directive (WFD), Member States must ensure all rivers are healthy by 2027. Hydropower dams are a major obstacle to reaching this target. Seven years to go, and 60% of rivers are still not healthy.

The impact of the WFD has been gutted by shoddy implementation, lacklustre enforcement, and the abuse of exemptions, often for the benefit of unsustainable farming and industry [4].  New hydropower plants are often built regardless of the non-deterioration principle of the law, without even asking for an exemption - even when there is evidence that the plant would further degrade river health. In Austria - one of the countries with the highest existing hydropower intensity - an additional 123 plants are planned. But a recent study [5] found that less than a third of the permits delivered for hydropower plants were in line with the WFD.

References:
[1] European Commission, 2011. European Red List of Freshwater Fishes,
[2] WWF, RiverWatch, GEOTA, EuroNatur, 2019. Hydropower pressure on European rivers: The story in numbers
[3] WWF, TNC, 2019. Connected and Flowing: A renewable future for rivers, climate and people
[3] The UN Convention on Biological Diversity (CBD) has existed since 1992 and meets every two years. In 2020, the CBD COP will be a pivotal meeting for biodiversity conservation, as a post-2020 Biodiversity Strategy will be agreed upon for the following decade. As a party to the CBD, the EU operates as one single bloc at the table, and so it is crucial that it shows strong leadership, commitments and tangible targets to protect biodiversity. Find out more here.
[4] 53% of surface water bodies in the EU are covered by at least on exemption (EEA WISE)
[5] WWF Austria, ÖKOBÜRO, March 2018. Umsetzung des Verschlechterungsverbots gemäß EU-Wasserrahmenrichtlinie in Österreich im Bereich Wasserkraf. The study analyses 200 documents related to hydropower plants authorisations, including 61 permits. 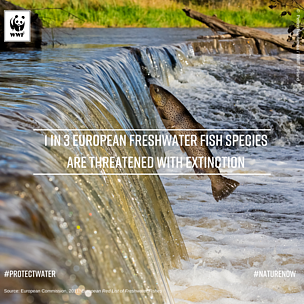 Such large-scale hydropower exploitation will result in a deadly combination for freshwater biodiversity.
© WWF-EPO 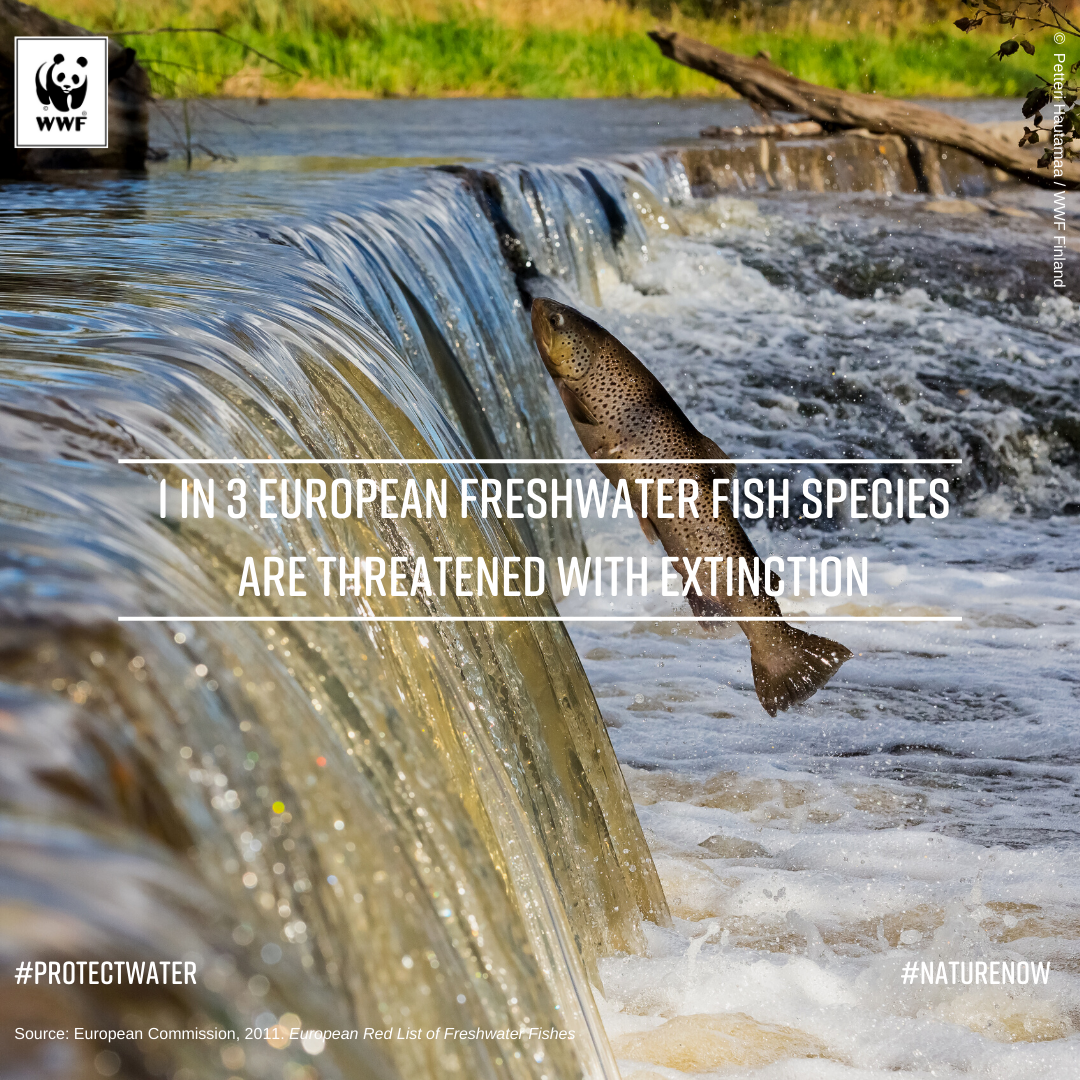 Such large-scale hydropower exploitation will result in a deadly combination for freshwater biodiversity.
© WWF-EPO
Download
Hydropower Pressure on European Rivers: The Story in Numbers
PDF 4.09 MB 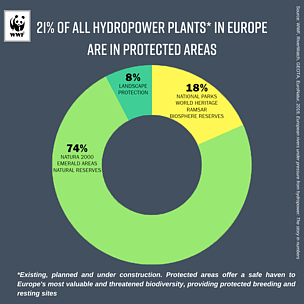 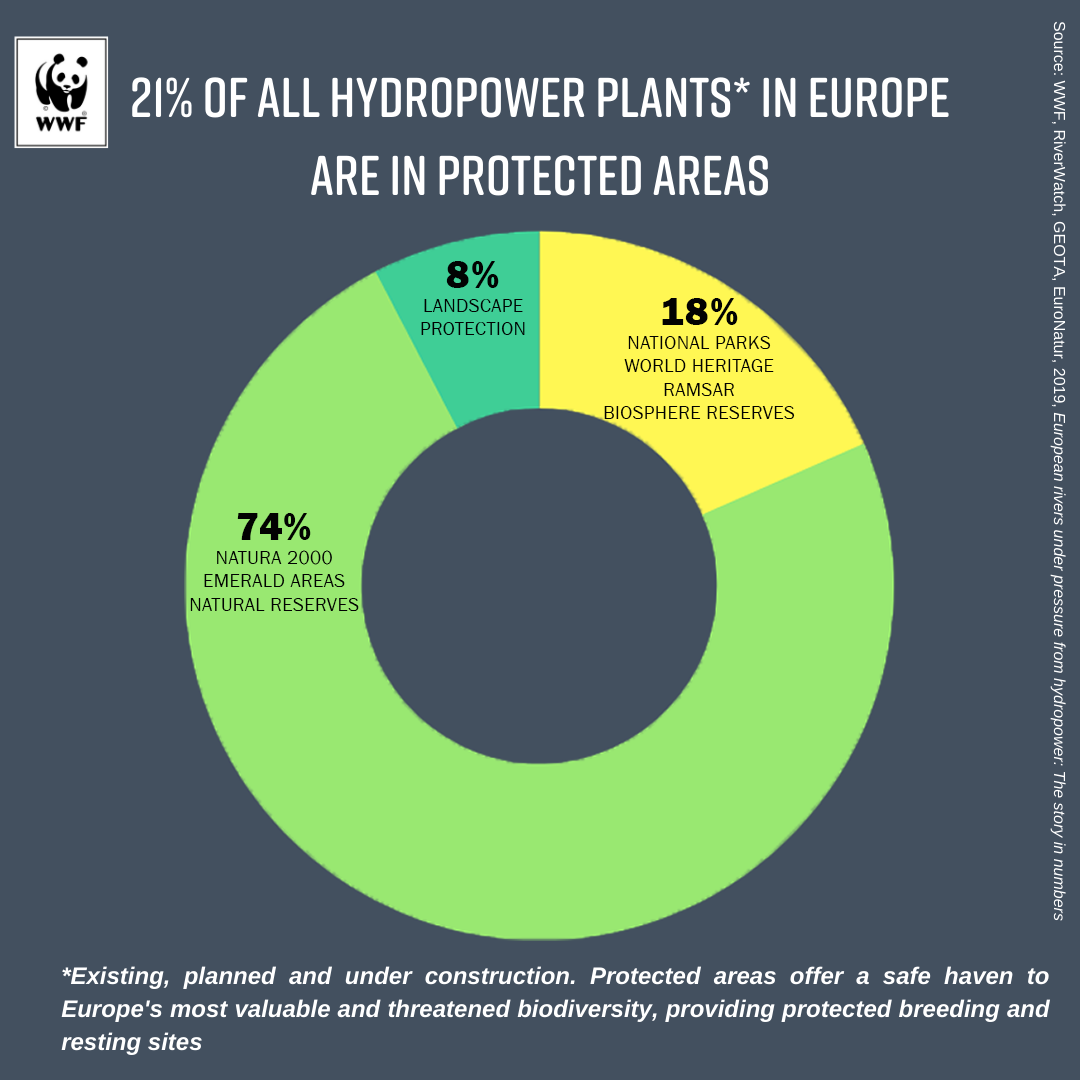 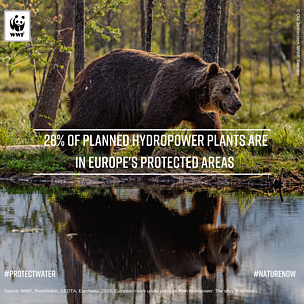 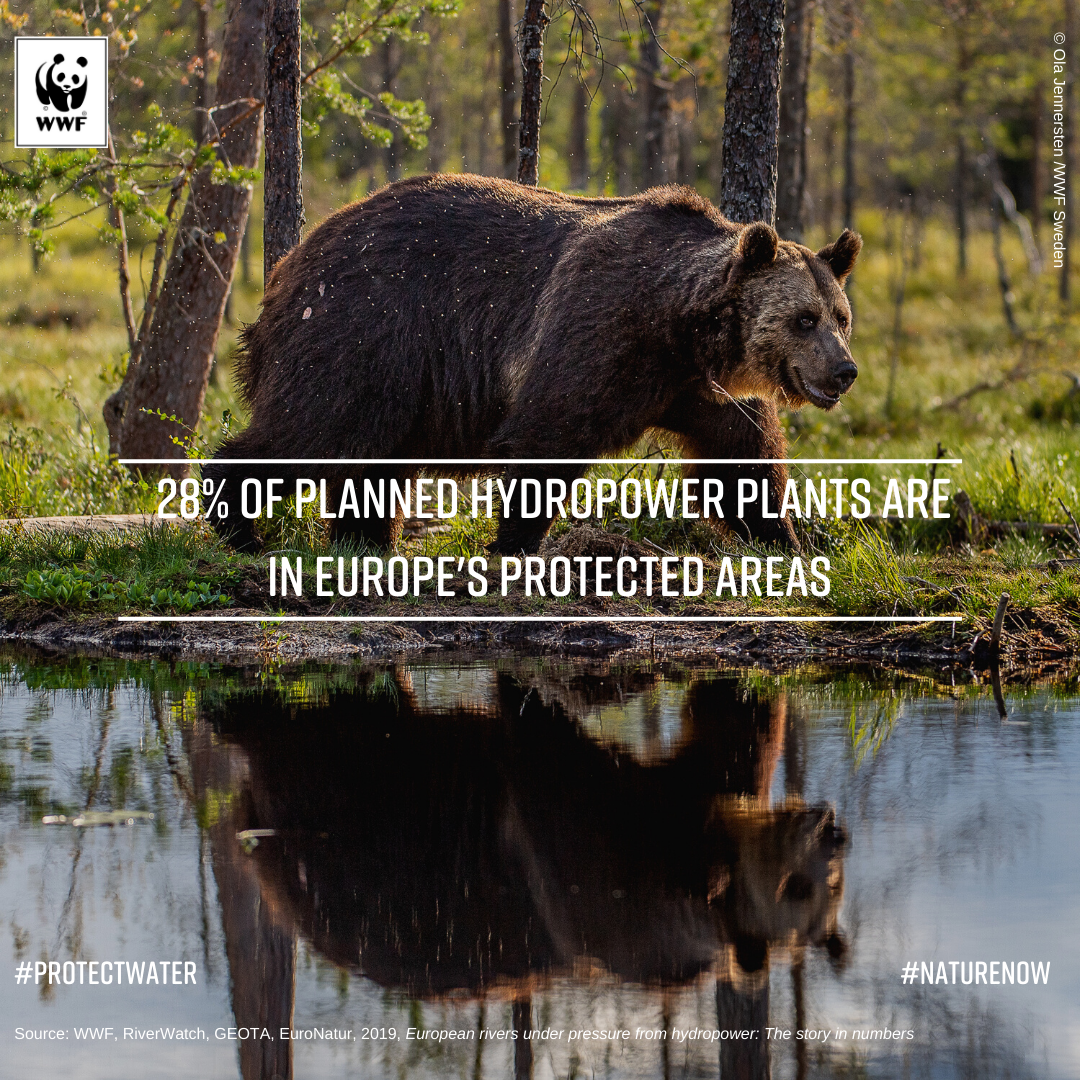 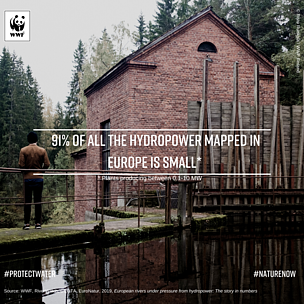 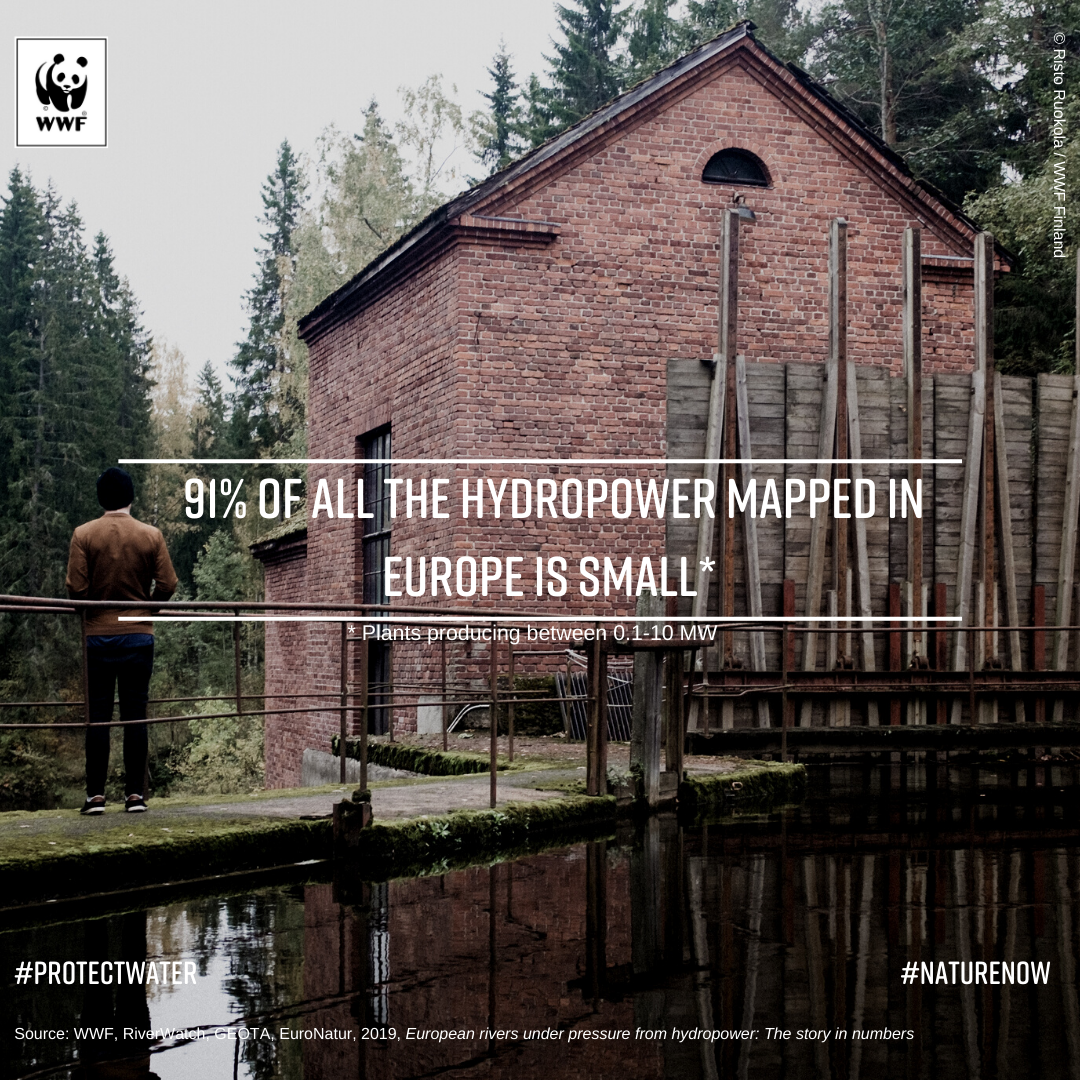