It was an extremely hot morning on the 30th March when the world over joined in celebrating the biggest grass root movement for conservation. Earth Hour! Amazingly some few minutes after 1000hrs the weather changed and it started powering really hard. But this did dampen neither the spirits nor the excitement of those who joined the Vikindu event
The anticipation was really high for everyone because the team was told that we will be the first eco tourists in at the Vikindu botanical garden in Vikindu Forest Reserve.
Khaya Anthotheca Meliaceae, Raphia Farinifera Arecaceae, Albizia Petersians Fabacaea; these are some of the unique tree species that are found at Vikindu, to get there one is expected to use the road which will take him about 30 minutes on a less traffic day or about an hour for days when the traffic is heavy. It is only 17 kms from Dar Es Salaam.
At the site the visitors were received by the Tanzania Forest Services agency (TFS) who were the hosts and the event followed right after.
The guest of Honor on the event the Mkuranga District Commissioner Mr Filberto Sanga while officiating the event called on the community members to take responsibility for the protection of the forest reserve. He said the communities living around the reserve are the ones responsible with the fires and deforestation in the reserve and on the other hand they are the ones who can take lead in the protection of the reserve.
He switched on the newly installed solar at the reserve’s office and led the team to the tour of the forest. The solar energy will be lighting up the office and some outside patches in the forest
Apart from the solar energy Earth Hour 2019 which has been supported by WWF UK also supported the construction of some beautiful picnic sites in the forest reserve 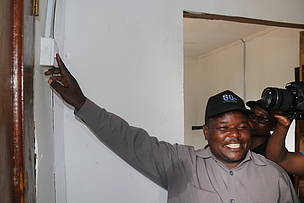