There are few places left in the world where nature remains untouched. The wild taiga forest in northern Russia – part of the largest forest on Earth – is one of them.

Encircling the top of the globe through the far north of Eurasia and North America, the taiga or boreal forest, makes up almost a third of the world’s remaining forest cover.

“It may not be as high profile as Amazonian or Indonesian rainforest but the Russian boreal forest is hugely important”, says Nikolay Shmatkov, Director of WWF-Russia’s Forest Programme. “It’s crucial in regulating global climate – its trees, soils and peat store more carbon than all tropical and temperate forests combined – and are home to many large animals like forest reindeer that are disappearing from transformed and degraded forests.”

While a relatively narrow range of species survive in its harsh climate, the forest is home to many plants and animals including white-tailed eagle, flying squirrel, otter, wild boar, forest reindeer and large predators like wolf, lynx and the Amur tiger. 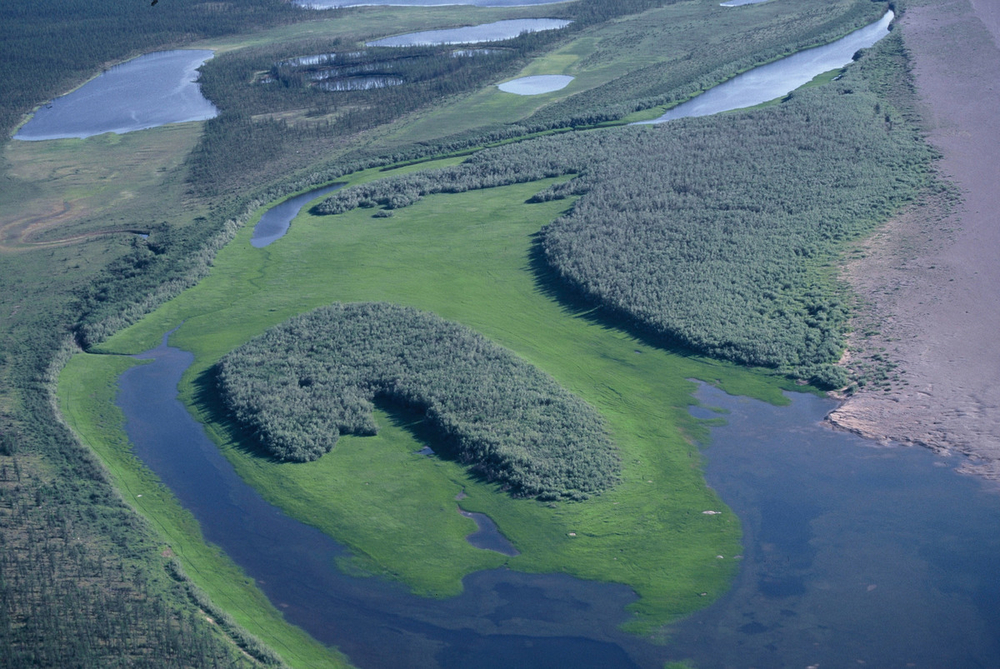 While about a third of Russia’s boreal forest remains pristine, it is under increasing pressure. Most intact forest is considered industrial forest under Russian law. And logging ancient forest instead of pursuing responsible forest management in already-transformed forest, has put intact forests at significant risk.

Between 2000-2013, 21 million hectares or 7.5 per cent of the total intact forest area in Russia were lost to fragmentation through human-caused fire, logging and mining. As demand for timber continues to rise, logging companies are moving further and further into untouched ancient forest.

“It’s easier to conserve the wild taiga than deal with the consequences of losing it – hurricanes, floods, and rivers filled with sediment. If we degrade these forests now, we won’t be able to restore them again”, says Nikolay. “We must introduce effective responsible forest management in already-degraded forests instead of continuing to log intact forest landscapes.” 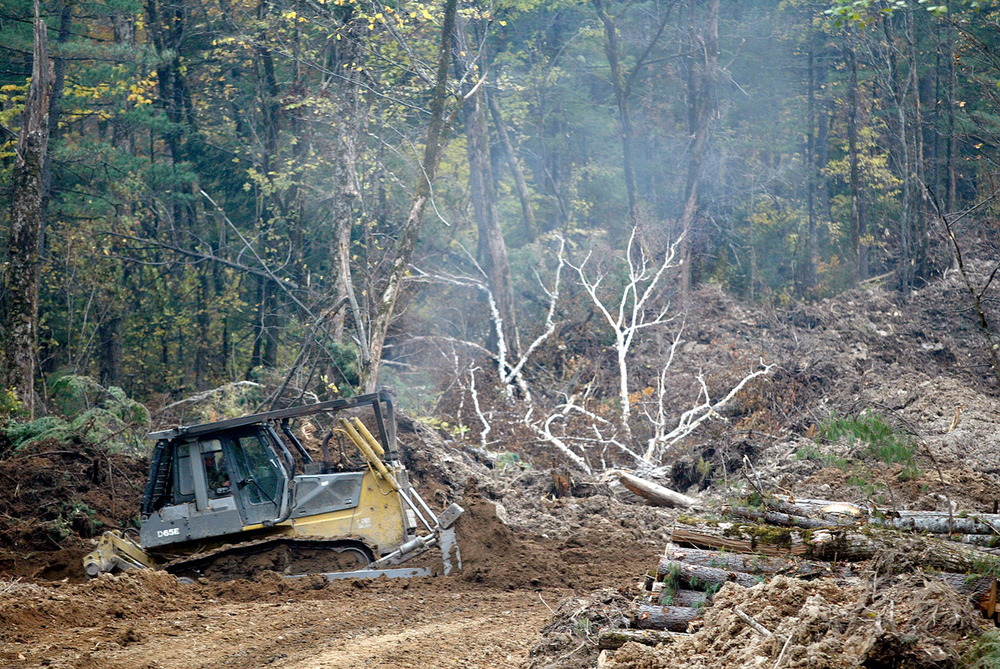 Halting the decline of the taiga means finding solutions that meet the sometimes-competing needs of logging companies, communities and conservationists. Continued indiscriminate logging is a dead-end approach but simply attempting to fence off all remaining ancient forest is impractical – forestry is a key economic sector.

Since the 1990s, WWF has promoted responsible forest management and sought to embed sustainability in the forest sector. A key part of this has been developing and promoting Forest Stewardship Council (FSC) certification – an approach that’s also favoured by retail giant and long-term partner, IKEA, whose business depends on a reliable supply of timber, much of which comes from Russia.

IKEA is committed to sourcing 100% FSC-certified or recycled timber by 2020 to ensure its business is sustainable. In Russia, IKEA reached this goal in 2017. As a result, logging companies supplying IKEA now integrate sustainability and conservation in their business planning and operations.


In need of a good map

One of FSC’s key principles for forest certification is that forests with high environmental, socio-economic or biodiversity value – known as ‘high conservation value forest’ (HCVF) – are identified and protected.

Mirroring this, one of IKEA’s requirements for suppliers is not sourcing timber from ‘intact forest landscapes’ (IFLs) unless logging is agreed through a credible multi-stakeholder process and wood is FSC-certified. IFL is a particularly common category of HCVF in Russia defined by an area of forest over 50,000 hectares without permanent settlement, transport links or economic activity.

Meeting such requirements relies first on knowing exactly where high value conservation and intact forest landscapes exist, and in an area the size of the Russian taiga, that is no small undertaking!

In the early 2000s, identification was an uncertain business, and the risk of accidental use of unacceptable wood was high. While helpful in establishing an overview, maps of Russian forests created in 2002 on the basis of the agreed Global Forest Watch methodology lacked sufficient resolution. This made identification of exact boundaries and risk assessment of potential logging areas by IKEA suppliers both challenging and highly subjective.

“We started to get a lot of requests from timber and audit companies for help in HCVF identification as part of the FSC certification process”, says Nikolay, “We were only able to go so far by drawing on various paper records and online data fragments but it took a lot of time and resource.”

A need to make the process more efficient, clear up confusion and inaccuracy, and fill in the missing pieces of the HCVF jigsaw soon became a priority.

“We realised that creating an open source digital platform with consolidated information on HCVFs would benefit everyone and support forest conservation across the whole country”, says Nikolay.

In 2006, with investment from IKEA,  Andrey Kartashov and other private donors, work began on the creation of a comprehensive website that would allow anyone to search for information on HCVFs. Research, planning, collection, analysis and digitisation of data from scattered and sometimes hard-to-access sources, often available only in paper, took more than seven years but with a collective effort from WWF-Russia and other sponsors and NGOs, an unprecedented HCVF database – HCVF.RU – went live at the end of 2013.

“The website is a universally accessible tool that supports the responsible management of Russia’s most valuable forests”, says Konstantin Kobyakov, WWF-Russia’s Forest Programme expert on HCVF. “It helps conservation NGOs, certification bodies and logging companies, especially those that are FSC-certified who need to determine HCVF boundaries and preserve ecologically and socially important forests within their lease areas.


High Conservation Value Forests are forests with high environmental, socio-economic, landscape, or biodiversity conservation values. The HCVF concept was created during the development of the FSC programme and HCVF identification and conservation is one of its key principles.

In Russia, the concept is formally defined in the FSC Russian National Standard and, along with nature reserves, national parks and wildlife reserves, helps conserve valuable forest which could not otherwise be protected. Most HCVF conservation does not prevent logging entirely but imposes certain restrictions, for example, replacing clear-cutting with selective felling. 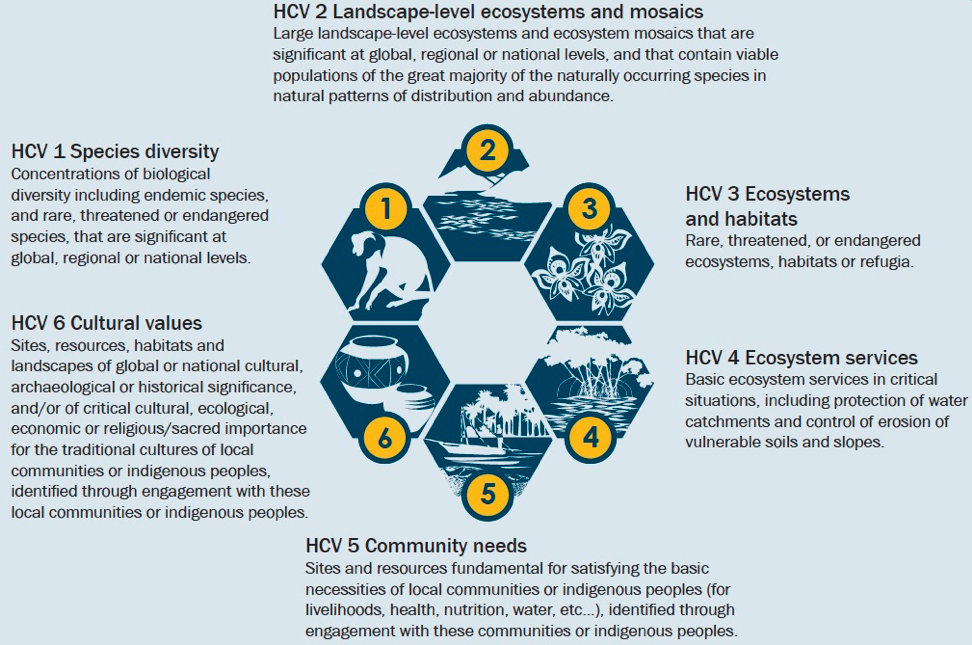 Explore the HCVF site and map

For a company, engaging and benefitting from HCVF.RU is as simple as choosing a region on the map, checking the information provided about current forest regulations and land use planning, and comparing the results with your logging plan.

The site offers the following content: The main working language of site is Russian but work is underway to improve the existing English-language version. The cartographic part of the site uses the open data from the GeoMixer software developed by RDC ScanEx.

Click on the sample maps below to go directly to the site or watch the introductory video for an overview. 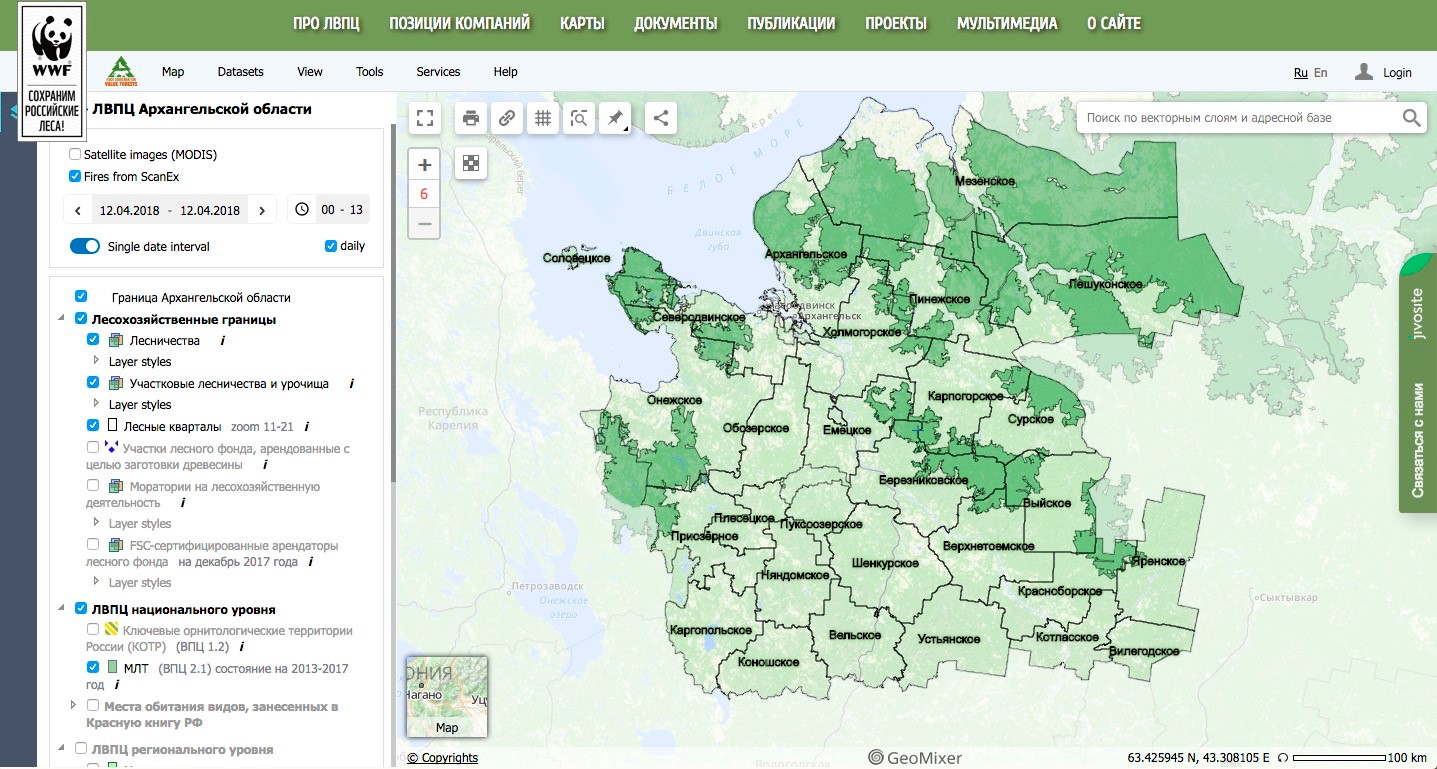 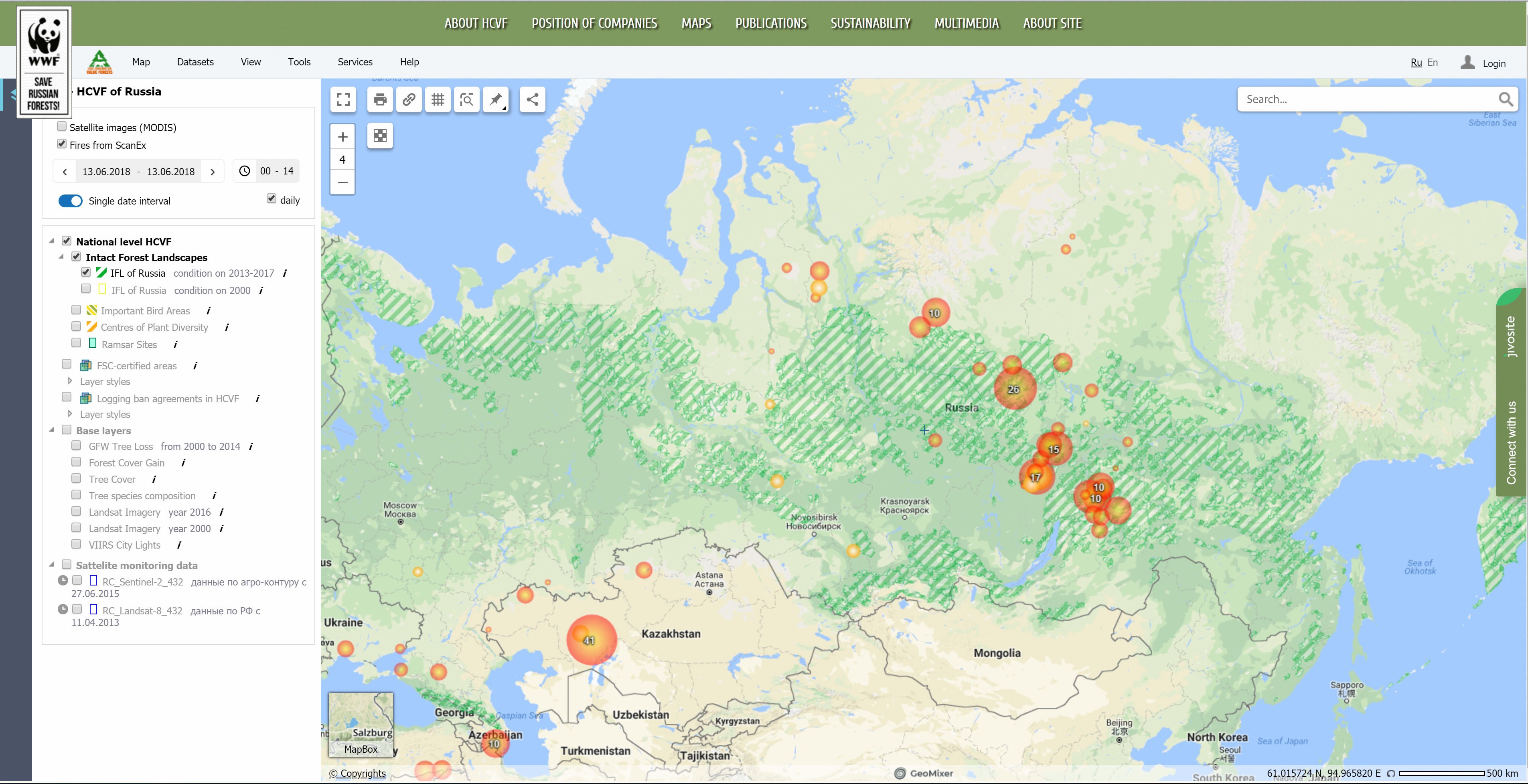 Today, HCVF.RU is officially recognised by FSC as the source of best available information on Russian HCVF. In the draft of the new Russian National FSC Standard and the FSC National Risk Assessment for the Russian Federation, its use is mandatory for FSC-certified companies. The tool has also won recognition from the forestry sector itself and has become an integral part of many companies’ workflow.

“WWF-Russia has developed a breakthrough technological tool which enables us to accurately identify the boundaries of intact forests and access an array of additional information. Prior to its appearance, the only way to define forest boundaries was to use a hard copy atlas and maps”, says Evgeny Zabubenin, Forestry Manager, IKEA Purchasing Services Russia LLC – Inter IKEA Group.

Beyond identifying HCVF boundaries, the site helps timber companies optimise HCVF management, verify suppliers and exercise due diligence. Auditors can verify compliance with the FSC certification requirements, and NGOs can monitor HCVF status and logging moratoria. Information on the site can even be used to help identify illegal logging.

“For Mondi Group, HCVF.RU is a very practical tool. For buyers and partners concerned about protection of HCVF the site offers reliable information about IFL boundaries, cores and leased area borders, as well as other information. It helps us provide a comprehensive response”, says Denis Popov, Group Natural Resources Manager at Mondi. “We’re looking forward to an improved English version of the site for better global engagement.”

“HCVF.RU is probably one of the most popular websites among certified timber companies”, says Olga Rogozina, Environmental Manager at Stora Enso Wood Supply Russia. “Sometimes the site is slow or temporarily unavailable for technical reasons but Stora Enso uses data from hcvf.ru within our own IT system for initial checking of wood origin, HCVF and protected areas.”

HCVF.RU has significantly improved identification and conservation of HCVFs in Russia. The platform is still a work in progress and while its users and creators recognise its limitations, they also see its future potential. It has recently found acclaim in international circles, stimulating interest in countries with similar HCVF conservation challenges.

In 2017, WWF-Russia shared its experience with WWF Myanmar and presented at the IFL Solutions Forum in Vancouver where the Russian approach to ensuring transparency on IFLs was recognised as one of the most advanced in the world.

“Despite the huge amount of work we’ve done, there are still a lot of opportunities for further improvement. At the moment, information on certain HCV types – including Protected Areas, IFLs (HCV 2), Important Bird Areas, Ramsar sites, Centres of Plant Diversity (HCV 1) and some others – is available on hcvf.ru for the whole of Russia. Information on other HCV types – HCV 1, HCV 2, HCV 3 and HCV 4 – is available only for certain regions of Russia where FSC certification is well-developed. There is also very little information on HCV5 and HCV6 covering social and cultural values because we’ve lacked coordinated work on their allocation in Russia and because of the sensitivity of some information”, says Konstantin “We also need to implement regular maintenance and updates.”


An integrated approach for people and nature

HCVF.RU is part of an integrated approach to sustainability and resource stewardship by WWF-Russia and its partners. It is complemented not just by promotion of FSC certification but also by intense dialogue in the Russian Boreal Forest Platform and the negotiation of logging moratoria with numerous concession owners. As of May 2018, 2,137,603 hectares of Russian forest are protected through voluntary moratoria agreed between companies and WWF.

Over the last decade, there has been a dramatic increase in the area of HCVF identified and excluded from logging through improved quality of certification and increased availability of information on HCVF boundaries – including online access via HCVF.ru. At the end of 2017, about 30% of the total FSC certified area in Russia (46.7 million hectares) had been recognised as HCVF and about 16% excluded from logging. This means that FSC-certified companies in Russia have totally excluded about 7.5 million hectares of HCVF from exploration and development.

“If we lose valuable forest, we lose value across whole landscapes”, says Nikolay. “Conserving HCVF means meeting the needs of logging companies, local communities and conservationists. Having the big picture as well as the detail is essential – it’s hard to manage what you don’t know and what you don’t understand.”