The images telling the story of wildlife trade

WWF photographer James Morgan reflects on the powerful photographs he took in support of our campaign to end the illegal wildlife trade. 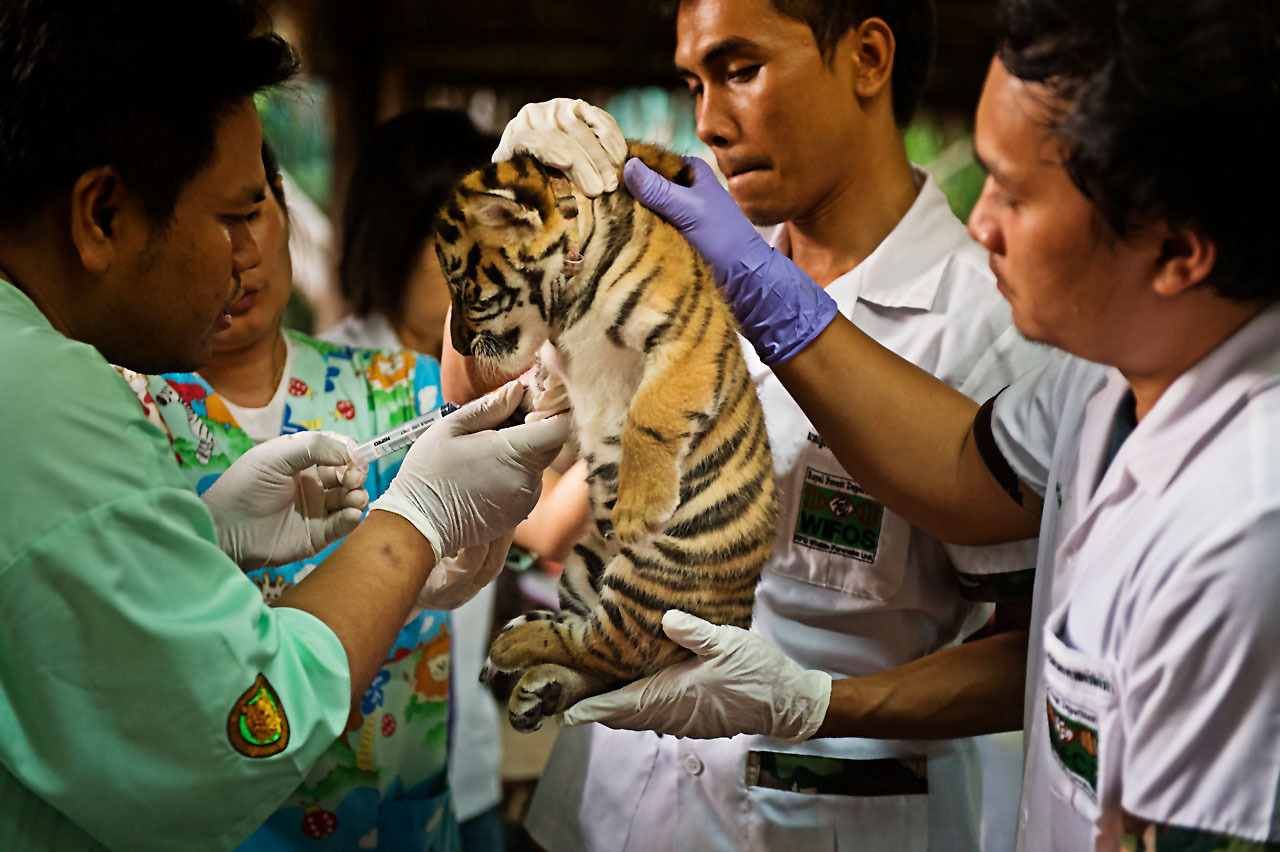 If I had to chose a favourite image from the series, it would probably be this one (above). The tiger cub is one of 16 that was found packed into crates in the back of a smuggler’s truck crossing the border from Thailand into Laos. The cub is surrounded by a veterinary team from Bangkok who are taking its blood in order to trace its DNA. I asked the chief veterinary surgeon if he had ever taken blood from a tiger cub before. “No, but it’s sort of like a kitten’ he told me.

In many ways the tiger cub did look like a kitten, but on another level the two animals couldn’t be more different. One of nature’s most beautiful and efficient predators, the product of thousands of years of evolution sitting cross-legged like Buddha as a confused and concerned group of humans try to pries answers out of it. It speaks to me of the wider relationship we have with the natural world, how we objectify it, make it an unwitting party to our affairs and invent barriers to help ourselves believe that we are separate from it.

It’s always hard to know whether you’re being objective about a photograph’s merit. It’s so easy for the experience surrounding the image, the series of moments leading up to it, to sway your judgment. Once we heard that these tiger cubs had been found we tried to get permission from the Thai authorities to photograph the cubs and were denied. In the end we decided to take a risk and drive 9 hours to the place they were being held to see if we could wing it. By chance, we arrived just after the police chief had left and just as the veterinary team were beginning to take blood samples. The fixer I was working with never slept facing west which apparently guaranteed us good luck for the entire trip. She was also very kind and respectful to everyone we came across which I think was just as likely to have been the source of our good fortune. Either way, it would have been a very different 9 hour drive back to Bangkok without these images. I do try to retain copyright to my images, having my name at the bottom of them ensures I can pay my bills every month, but the reality is that all my images are collaborations, most obviously with the people who appear in them. This image is of eco ranger Mba Ndong Marius holding seized Ivory in front of a line of confiscated weapons in a small town called Oyem in the north east of Gabon.

This image is interesting as it’s actually a scene I created. When we first raised the idea of photographing confiscated ivory and weapons at the police station in Oyem, it was all piled up outside a drab looking building and didn’t make for an arresting photograph. So we moved everything across the street to a building with a bit more texture and colour. Then we bought in Mba Ndong Marius to hold the elephant tusks and add some perspective and another focal point. And then, by chance, we came across two ladies wearing clothes that echoed the colour palette of the scene who kindly stood in the window finishing off the image.

One of the things that has always captivated me about photography is its troubled relationship with truth. I think originally this connection stemmed from a need to differentiate itself from painting. Painting was art, photography was a way to document, to record, to create timeless sealed packets of truth. And whilst that relationship has been challenged recently with digital post production, that link still exists and it’s something I’m very attached to and conscious of when I’m working.

So why not just take the photograph of the ivory sitting outside the police station where it was when I arrived? In recent years news gathering has changed enormously, millions of images are now uploaded every day, often only seconds after they’re taken. But does this proliferation of images bring us any closer to understanding the world? Or inspire us to action? Personally I’m much more concerned with eliciting the truth of a situation than I am with feverishly documenting the facts. There are endless statistics about ivory online, but my interests lie elsewhere. It’s the internal lives of the people I meet that fascinate me. My role is to talk to people and help them tell their stories in a way that they’re unable to themselves. The space photojournalism occupies at the intersection of art and reportage; being entirely embedded in fact but also uniquely positioned to transcend it, is what I believe gives photojournalism its power as a medium and makes it such a valuable tool for NGOs and campaigning organisations. Shortly after taking the photograph of Mba Ndong Marius with the seized ivory, it was all piled up on a truck to be transported to the capital Libreville. I was piled into the back of the truck on top of the ivory and we drove ten hours through the night, arriving in Libreville just before dawn. All night, trucks had been arriving from all over the country bringing huge quantities of contraband elephant tusks and weapons. When we arrived WWF and other organisations were busy counting it all by torch light.

This image was taken an hour after Gabon’s president Ali Bongo Ondimba had set the entire stockpile alight at a ceremony which took place later that morning. I’ve chosen it here as it serves as a strong end point to the series of images. When these images have appeared in magazines and newspapers this image is often used as a closer. I think the shape of the flames works as a sort of visual punctuation and for Gabon the move was, on some levels at least, conclusive and irreversible. But of course, the whole notion of an end point to wildlife crime is misleading, and in all honesty this photograph scares me. And I do wonder if the aesthetics of it slightly hide the horror of what it’s actually depicting; because wildlife crime continues and the battle is far from over. Gabon has taken a strong stance and hopefully other African nations will follow suit. But without real pressure on the demand countries this will not be resolved.

James Morgan is an award winning photojournalist and filmmaker. The majority of his work is focused around providing supplementary narratives to environmental and human rights policy. His images have led campaigns for WWF, the United States Agency for International Development and the United Nations Refugee Agency. www.jamesmorganphotography.co.uk, Facebook, Twitter.