By 2030, the EU could be reducing its energy use by more than a third and generate almost half of the remainder from renewables. The post-2020 climate and energy policies needed to deliver this vision would help the EU to reduce its €573bn external fossil fuel bill and cut its greenhouse gas emissions in half.

Coming amid an increasingly active debate over what should follow current EU climate and energy legislation (the 20-20-20 package[2]), WWF’s report adapts the WWF Global 2050 Energy Scenario[3] to the EU27 level and shows that by 2030 the EU could:

• use at least 38% less energy compared to a business as usual projection,
• generate more than 40% of its energy from renewable sources,
• by doing both, reduce its energy related greenhouse emissions by 50% compared to 1990 levels.

As Europe’s economies struggle to recover, renewable energy and energy savings are beacons of hope. Almost 8 out of 10 Europeans agree that fighting climate change can boost the economy and create jobs[4] and 70% of Europeans believe investment in renewable energy should be prioritised over the next 30 years, compared to alternative energy sources including shale gas, nuclear and carbon capture and storage (CCS) plants[5].

“Improving on Europe’s 2020 climate and energy targets by introducing an ambitious package of post-2020 measures is a win-win situation for everyone. It would not only help reduce the impact of climate change [6], including huge health and environmental costs, but it would also help to generate up to 5 million jobs [7], significantly boosting the economy,” said Jason Anderson, Head of Climate & Energy at WWF European Policy Office.

However, to keep Europe on track, on-going effort and strong political will are needed. The timely adoption of a coherent package of ambitious and binding post-2020 targets for energy efficiency, renewable energy, and emissions reductions is key.

“We must now decide how our energy system will develop after 2020, so that current benefits are maximised, not squandered”, added Jason Anderson. “Our report clearly shows that the EU has untapped potential for cutting energy use, taking full advantage of renewable sources that could deliver cheaper and more secure energy, and ensuring that a 100% renewable European energy system by 2050 remains within reach.”

Note to the editors:

3. In 2011, WWF released The Energy Report based on the specially commissioned ECOFYS Global Energy Scenario. The report showed how, by 2050, the planet’s entire energy needs could be met from renewable sources. The first step to reaching this goal is to limit energy use in absolute terms. The second step is to scale up energy supply from current renewable generation technologies (prioritising their delivery in order of sustainability - solar, wind, water, geothermal, and only then bio-energy under strict conditions).

6. More energy savings and renewable energy are also needed to protect the planet. This summer (2012), more Arctic sea ice melted than ever before - with the result that there was nearly 50% less ice than the 1979 to 2000 average. The record melt was bigger than the previous record by an area about the combined size of Sweden and Finland. Furthermore, research on the impact of continuing to burn fossil fuels has revealed that the health and environmental costs of generating energy in some countries are higher than the value of that energy once it is produced. 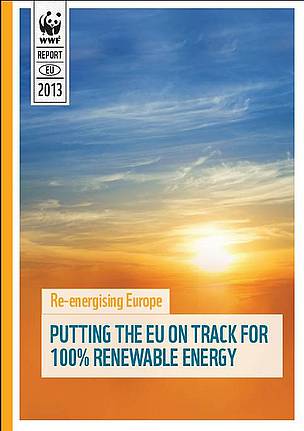 The WWF report shows that by 2030, the EU could be reducing its energy use by more than a third and generate almost half of the remainder from renewables.
© WWF 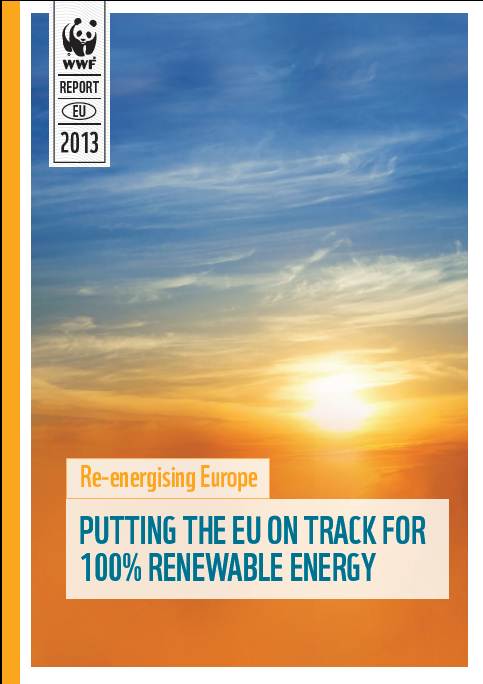 The WWF report shows that by 2030, the EU could be reducing its energy use by more than a third and generate almost half of the remainder from renewables.
© WWF
Download
WWF report "Putting the EU on Track for 100% Renewable Energy"
PDF 5.37 MB