It is the first time such a large and diverse group of EU businesses has called for Europe to increase its policy ambition to cut emissions to 30 per cent.

The declaration reflects a growing coalition of businesses and climate ministers who believe Europe must review its climate policy to secure its long-term economic competiveness with China and the US in growing global market for low carbon goods and services. The current European target is for the EU to cut emissions by 20 per cent from 1990 levels by 2020.

The joint business declaration has been led by The Climate Group, The Cambridge Programme for
Sustainability Leadership, and WWF Climate Savers Programme and will be published and sent to the
European Commission, Council, Parliament and Presidency ahead of the EU Environment Council tomorrow where Ministers will debate the costs, benefits and nature of increasing the EU’s climate reduction target.

The joint declaration states “There is no high-carbon low-cost future for Europe” and calls on the EU to consider increasing its greenhouse gas reduction target to drive low carbon investment, saying:
The move by European businesses supports recent calls from Ministers from four of Europe’s leading nations Denmark, France, Germany and the UK who believe Europe will gain jobs and competitiveness from the move and see significant economic benefits from strengthening its own climate policy even without a global deal.

Three European climate change ministers – the UK’s Chris Huhne, France’s Jean-Louis Borloo, Germany’s Dr Norbert Röttgen – recently stated that a policy for moving to 30 per cent would not act as a brake on the EU economy but would boost jobs and help Europe stay competitive as India, China, Japan and the US challenge its market share of 22 per cent of the global low carbon goods and services sector.

The EU should agree the legislative proposals as soon as possible to obtain the maximum benefit from the
economy stimulus that it would bring. It will also help reinvigorate on-going international negotiations at the UN climate talks in Cancun, Mexico later this year.

Sandrine Dixson-Declève, EU Director, Cambridge Programme for Sustainability Leadership says: “By moving to a higher target, the EU will have a direct positive impact on the carbon price and on low-carbon market creation through to 2020. This will deliver the economic signals and regulatory certainty that companies need if they are to continue investing billions of Euros in low carbon products, services, technologies and infrastructure. The businesses signing this declaration already understand that the financial risk of weak action on climate change is far greater than the cost of investing today.”

Mark Kenber, International Policy Director, The Climate Group says: “As a global clean tech race gets underway, a critical mass of European businesses and governments are beginning to see clear economic benefits of advancing European ambition to cut emissions. A clear mandate from EU industry means we could see Europe go into Cancun discussions with renewed confidence in its global leadership and economic future.”

Jason Anderson, Head of European Climate Change and Energy Policy, WWF said: "Greater ambition on climate policy will help drive systemic improvements in efficiency and capital investment that will benefit both society and forward thinking businesses like these. Far from being a threat to the economy, European action on climate could be the spark of a new wave of innovation."

Support for the Joint Business Declaration on Increasing EU Climate Ambition to 30 per cent:

Jose Manuel Entrecanales Domecq, Chairman, Acciona said: "We need 21st century energies to build the 21st century economy. From our company's standpoint, to review the 20 per cent GHG reduction target, even in the absence of a strong international agreement, makes economic sense because it will strengthen European leadership. Reaching a target beyond 20% will unlock innovation and financing potential, and will increase European industry's readiness for new growth and development opportunities as the markets for low-carbon, high-efficiency goods and services expand. Socially it will contribute to the European energy supply security, and will contribute with new direct and indirect jobs through Europe; lastly, environmentally, increasing the emission reduction target will help Europe to reach the 450ppm goal we need to keep
global warming within the 2ºC limit by 2050."

Keith Clarke, chief executive of Atkins, the UK's largest engineering design consultancy said: "We are already seeing a race to develop more carbon-conscious techniques in sectors such as building design and energy creation and this knowledge is highly sought after. If Europe is to taking a leading role in this field we must move quickly and a stronger target for carbon reduction, universally applied, will give us that momentum."

Sam Laidlaw, Chief Executive of Centrica plc said: “I am pleased to support the Joint Business Declaration and the move to a 30 per cent EU Greenhouse Gas reduction target. Centrica is already taking positive steps to decarbonise our power generation and make our customer’s homes more energy efficient. Our commitment is for secure, low carbon and affordable energy supplies and we look forward to the active involvement and support of Government, regulators and consumers in delivering this goal.”

Jeroen Overgoor, Director Corporate Communications and Public Affairs, Eneco said: “A level playing field between fossil and renewable energy is in Eneco's opinion an essential condition for a healthy EU investment climate for renewable energy. Therefore the costs of climate change, health hazards and environmental risks have to be included in the market price of fossil energy. The current low price of CO2 illustrates that the ambitions of the EU in this field should be advanced to accelerate the achievement of this necessary level playing field.”

Alain Grisay, CEO of F&C Asset Management says: "Capital investment is vital to fund the transition to a low-carbon economy, and growing numbers of investors stand ready to play their part. But this capital will not flow at the scale and pace that is needed unless governments set clear, credible and stretching carbon emission targets. A 30 per cent GHG reduction target sends an unambiguous message that will mobilise capital and spur real growth in the low-carbon economy.”

Ricardo Cordoba, President GE Energy, Western Europe and North Africa said: "Energy efficiency improvements and low-carbon technologies in power generation currently fall short of full deployment for a number of reasons, most of which can be addressed through effective policies and programmes. The European Emission Trading Scheme (EU ETS) is one such policy. However the ETS by itself and with its current target is insufficient to drive an energy transition and change the fuel mix in Europe by 2020".

Agostino Renna, VP & GM, South & Central Europe, Energy Solutions, Johnson Controls Inc. says: "There has never been a more compelling event than the phenomenon of climate change. With its formidable challenges will come unprecedented opportunities to drive innovation and economic growth in Europe. The time for action is now. Amplified, focused, ambitious and assertive policy and legislation aimed at stimulating demand for energy efficiency and low carbon technologies (especially in the buildings sector) in Europe, will bring clarity and certainty around the future of the new environmental economy and unlock investment and broad-based solutioning of this truly global problem."

Ian Cheshire, Group CEO Kingfisher plc said: "Kingfisher fully supports the move to a 30 per cent target, which would be a very positive step towards achieving a global deal at COP16 in Cancun this December. A 30 per cent target will be good for the EU economy and it's good for the future sustainability of business. The experience of Kingfisher’s companies across Europe shows that there is a strong appetite among the public to reduce individual carbon impact. Governments must harness this by helping business to change consumer behaviour for the better and by providing the right incentives."

Hannah Jones, VP Sustainable Business and Innovation at Nike says: "Nike believes that progressive EU Climate Strategy will help forge the pathway to environmental progress, economic growth and will provide a healthy stimulus for innovation. We would like to see the EU being ambitious in its climate strategy because business needs certainty and a level playing field to help spur green jobs and unlock innovation essential to creating technology and infrastructure solutions for a sustainable future."

Serge Foucher, Executive Vice President, Sony Europe, said: "As partner to the WWF Climate Savers Program, Sony Europe fully supports the manifesto being delivered to the European institutions. To move beyond a 20% by 2020 target will demonstrate leadership and stimulate greater action and innovation in tackling the environmental challenge across Europe. We believe that this will in turn help develop long-term sustainable economic development and job creation. At Sony we recognise the need to be ambitious to inspire change and we are taking our own steps through our "Road to Zero" global environmental plan, which includes a long-term goal of achieving a zero environmental footprint by 2050. Among other mid-
term goals Sony commits to reduce GHG emissions from operations by 30% by 2015 as compared with 2000, and to reduce products power consumption by 30% per unit by 2015 as compared with 2008 (financial years). We trust the Commission takes this opportunity to keep the region at the forefront of low carbon technology growth and we look forward to their response."

Click to read the full text of the Joint Business Declaration - Increasing Europe’s Climate Ambition will be Good for the EU Economy and Jobs.

For further information and interviews with the business leaders groups or their corporate members please contact: Disclaimer:

The Joint Declaration does not necessarily reflect the position of all members of The Climate Group , The Cambridge Programme for Sustainability Leadership and WWF Climate Savers.

BACKGROUND:
In June 2010, The Climate Group, The Prince of Wales’ Corporate Leaders Groups on Climate Change and WWF Climate Savers Programme published a joint declaration – Joint Business Declaration on Increasing Europe’s Climate Ambition – to EU institutions and ministers asserting that it is in Europe’s economic and strategic self-interest to advance its ambition on climate change beyond its current 20 per cent greenhouse gas emissions reduction target. The new joint business declaration builds on this momentum.

About The Climate Group
The Climate Group (www.theclimategroup.org) is an independent, not-for-profit organisation working internationally with government and business leaders to advance smart policies and technologies to cut global emissions and accelerate a low carbon economy. Its global coalition of 78 leading
companies, states, regions and cities around the world recognise the economic and environmental imperatives of taking decisive action now. The Climate Group was founded in 2004 and has operations in Australia, China, Europe, India and North America.

About WWF Climate Savers Programme
WWF Climate Savers (www.panda.org/climatesavers) is a programme catalyzing global business leadership towards a low carbon economy. Climate Savers companies are proving that cutting carbon emissions and spurring economic growth can go hand in hand. Over the past decade, with the support of WWF, these leading companies have collectively decreased their cumulative CO2 emissions by 50 million tons (equivalent to the annual emissions of a country like Switzerland). Leading by example, these companies are creating competitive advantage and increasing shareholder value. Together they are leading climate change action throughout the business community. 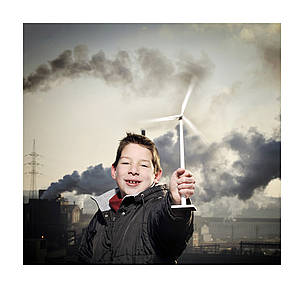 The earlier the EU can show it is reducing climate pollution and moving to the renewable energies path, the better for the international debate.
© WWF/Ezequiel Scagnetti 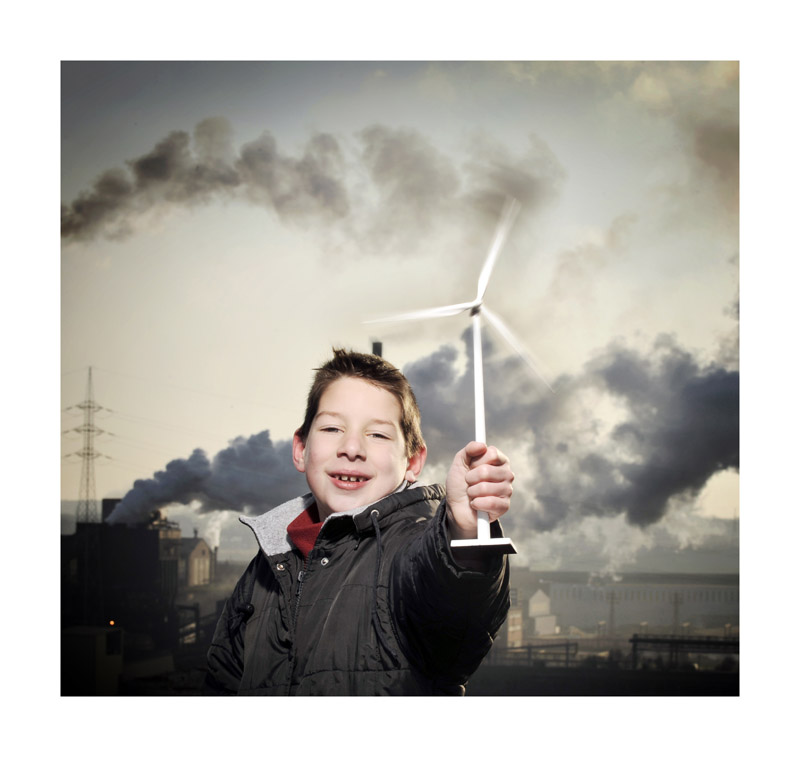 The earlier the EU can show it is reducing climate pollution and moving to the renewable energies path, the better for the international debate.
© WWF/Ezequiel Scagnetti
Download
Business declaration on EU climate policy
PDF 225 KB