The Assessment of the Potential Implications of Application of CMM-2008-01, a technical evaluation by Pacific Commission scientists charged with providing advice to the Western and Central Pacific Fisheries Commission (WCPFC) says that the newly introduced Conservation and Management Measure (CMM-2008-01) won’t meet its objectives of maintaining bigeye tuna stocks and spawning biomass at sustainable levels by simply reducing the fishing mortality of bigeye tuna by 30 per cent over three years.

The measure, which includes setting effort and catch limits in longline and purse seine fishing, closing fishing of high-seas pockets, and implementing a seasonal ban on Fish Aggregating Devices (FADs), are just not enough to maintain bigeye tuna stocks at sustainable fishing levels over the next 10 years as planned.

“The value of this assessment is that it shows the likely result on high value tuna stocks of barely adequate fishing controls that are then further weakened with loads of exemptions,” said Dr. Jose Ingles, WWF fisheries expert.

The CMM-2008-1, adopted by the WCPFC in December 2008, was designed to ensure that bigeye and yellowfin tuna stocks are maintained at levels capable of producing their maximum sustainable yield through the implementation of compatible measures for high seas and Exclusive Economic Zones.

According to the assessment, reductions in longline catch won’t be sufficient for meeting the required reduction in fishing mortality on adult bigeye tuna while the exclusion of archipelagic waters from the measure—which encompasses most of the fishing activities of the Indonesian and Philippine domestic fleets and significant amounts of purse seine effort in Papua New Guinea and Solomon Islands—leaves out an important source of fishing mortality for juvenile bigeye tuna.

The effect, according to this assessment, will be little if any reduction in the overfishing of bigeye tuna from current high levels of 50-100% above sustainable yield levels.

The spawning biomass of bigeye tuna is also predicted to worsen by 2018 between 40-60% below sustainable levels.

“The fishing industry is scrambling to supply growing international demand for tuna, which puts tremendous pressure on the already heavily fished tuna stocks in the Coral Triangle” said Dr. Ingles.

“The Scientific Committee of the WCPFC should immediately address the shortcomings of the measure and recommend appropriate steps to meet the objectives it set forth.”

“The exemptions outlined in the CMM-2008-01 have watered down its effectiveness. Closing or banning fishing in high seas for example will simply shift fishing effort to the Central Pacific, which scientist believe are more vulnerable areas for bigeye tuna.”

The Coral Triangle contains spawning and nursery grounds and migratory routes for commercially-valuable tuna species such as bigeye, yellowfin, skipjack and albacore, producing more than 40% of the total catch for the Western Central Pacific region, and representing more than 20% of the total global catch.

Bigeye tuna accounts for 10% of the global tuna catch and is eaten as steaks or as sushi and sashimi.

Catches in 2006, estimated at over 2.3 million tones, were the highest recorded; but two of the most valuable species, bigeye and yellowfin tuna, are at serious risk of overfishing.

“If we are to see an effective reduction in the overfishing of tuna in the Coral Triangle, we need to make sure that the measures put in place are sufficient and strong enough to create drastic results” says Dr. Ingles. “Maintaining profitable and sustainable tuna stocks means ensuring the bounty of this shared resource for future generations.” 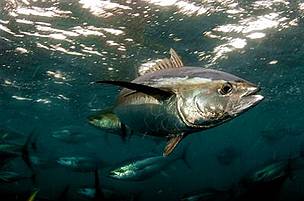 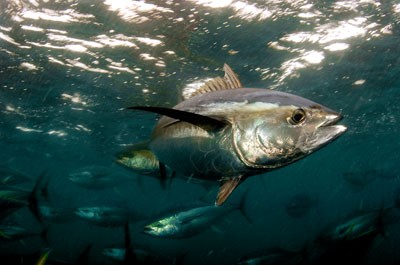 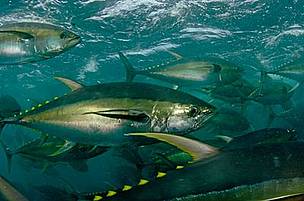 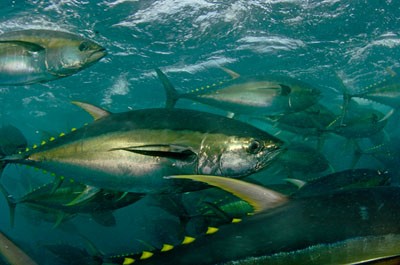