The Amazon is burning. Europe must not shy away from its responsibility | WWF

The Amazon is burning. Europe must not shy away from its responsibility

The Amazon is burning. Europe must not shy away from its responsibility.
WWF expresses its serious concern about the spread of fires in the Amazon that threatens the existence of the world's largest tropical forest, habitat of thousands of animals and plants and home to more than 34 million people, including around 500 indigenous peoples. The fires are consuming important areas of forest in the Brazilian and Bolivian Amazon, and in other ecoregions such as the Chiquitano Forest, the Chaco, the Pantanal and the Cerrado, in both Bolivia and Paraguay.

The Amazon plays an important role in the climate regulation of South America, even influencing the rainfall regime of the region. In addition to seriously affecting the biodiversity of the area, the fires that have intensified for about two weeks, worsen the climate crisis due to carbon emissions from the burning of organic materials. The affected areas will be more vulnerable to droughts, floods and other effects of climate change, due to lack of vegetation. Forest loss will also reduce the capacity of ecosystems to absorb carbon dioxide.

Faced with this ecological devastation, WWF calls on the countries of the region - Brazil, Bolivia, Colombia, Peru, Ecuador, Venezuela, Guyana and Suriname - to protect the Amazon, fight deforestation and reduce the causes behind these fires.

It also calls on the EU and its Member States to step up efforts to curb the impact of EU consumption on deforestation and the destruction of other ecosystems around the world, linked to commodities such as soy, palm oil, cocoa or meat.

As a top importer of these products, accounting for as much as 36% of all global imports of crop and livestock products associated with deforestation, the EU must radically rethink the way it consumes.

We expect the incoming European Commission to urgently propose powerful legislation to ensure that no product linked to deforestation or ecosystem destruction is allowed to be placed on the EU market, and we also need to support producer countries to address the challenges and drivers.

Any trade agreement should not only include provisions to conserve or sustainably manage forests and other ecosystems, but trade and sustainability chapters should be made mandatory and accompanied by strict enforcement measures. Regular reviews of existing trade agreements and their impacts on nature and people should also become the norm.

The immediate impact of fires on biodiversity is the death of thousands of animals and plants that inhabit these forests, including emblematic species of great ecological importance such as the jaguar, but, in addition, burning causes a loss of habitat that threatens the survival of the species. These fires also involve serious social, economic and public health problems. The livelihoods of small local producers and indigenous peoples are threatened by the spreading of the flames.

Historically, fires in the Amazon have been linked to deforestation due to the expansion of agricultural activity and this occasion is no exception, as was verified with the increase in deforestation in the last year. According to the Environmental Research Institute of the Amazon of Brazil (IPAM), the 10 municipalities with the most heat sources are the same ones that have the highest deforestation. The conditions of the dry season this year have been within normal ranges so the large number of fires experienced in comparison to other years cannot be attributed to the weather.

Fighting this fire requires more than resources. Fire and forest fires are caused by human action, beginning with the deforestation of forests. Public policies must act to end large-scale deforestation in the Amazon.

WWF shares the concern of civil society and calls on government leaders to take a stand in this problem. In this regard, WWF strongly rejects the statements of President Jair Bolsonaro, who attributes the responsibility to NGOs, delegitimizing the debate proposed by public opinion and civil society, and diverting the focus of attention from what really matters: the well-being of nature and the people of the Amazon.

To prevent future fires, it is urgent to fight the causes of deforestation throughout the biome and promote a subsequent reforestation that allows the forest to be restored and prevents further degradation and loss of vegetation.

Additionally, it is necessary to promote sustainable livelihoods for small agricultural producers, which can cause forest fires due to poor fire management as a tool to expand their land.

WWF is committed to the conservation of nature and will continue to act through its different programs and projects to curb the current crisis of destruction that the Amazon and other ecoregions of great importance for the health of our planet are experiencing. 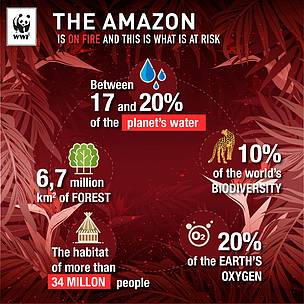 What's at risk due to Amazon wildfires
© WWF

What's at risk due to Amazon wildfires
© WWF