ALONG with other species of marine turtles, the hawksbill sea turtle (Eretmochelys imbricata) is under threat, classified as critically endangered by the International Union for the Conservation of Nature (IUCN).

Now, partners behind the conservation research project “Bring Back the Bills”—WWF-Australia, the University of the Sunshine Coast (USC) in Queensland, the Conflict Island Conservation Initiative (CICI), and volunteers from community turtle monitoring groups in Milne Bay, Papua New Guinea (PNG)—are concerned that hawksbills will be in even greater danger.

Satellite tracking recently confirmed that hawksbill turtles use the Coral Sea as their highway to travel from PNG to the Great Barrier Reef. The Australian federal government, however, plans to reduce protected areas in the Coral Sea by 50 per cent.

“Now the government has rezoned the Coral Sea marine park, removing large areas of ‘no-take’ that include the areas the hawksbill turtles used to migrate, and replacing them with areas that only protect the seafloor and allows some commercial fishing,” reported The Guardian in a May 29 article by Graham Readfearn.

While hawksbill turtles were declared endangered by Queensland Government State legislation in May 2017, the population continues to decline.

Hof added in a media release that the species “must be afforded protection across borders at their nesting beaches and feeding grounds, and along their entire migratory path, if they are to recover."

Hof recently documented a two-week turtle nest monitoring field trip from 29 December 2017 to 12 January 2018, supported by WWF-Australia, the Isaacson Davis Foundation, and USC, to the Conflict Group of Islands in PNG to help determine migratory routes, foraging grounds, and the presence of other turtle populations. “Bring Back the Bills” is also using information collected from satellite trackers to address the decline of hawksbills across the Indo-Pacific region. These trackers were funded by the Reef HQ Aquarium Turtle Hospital, and units were attached to 10 hawksbills nesting in the Conflict Group of Islands during the field trip.

Millions of hawksbills were regularly killed for their shells until a worldwide ban was declared on the trade by the Convention on International Trade in Endangered Species of Wild Fauna and Flora (CITES) in 1977.

“Similar to in Australia, PNG hawksbill populations are threatened by unsustainable legal take in fisheries, as bycatch using modern practices, and by the impacts of climate change, including loss of nesting and feeding habitat,” said Hof in the report. “Both Australia and PNG are listed in the top three countries for the highest number of legally taken turtles in the world. Anecdotal evidence also suggests illegal international trade is occurring with a black market in PNG.”

The Conflict Group of Islands, owned by Australian businessman Ian Gowrie Smith, is an atoll located some 154 km southeast of Alotau in PNG’s Milne Bay Province. The owner is dedicated to ongoing protection of the Conflict Islands. Several of its 21 islands are uninhabited, and the atoll is a known nesting ground for hawksbill and green turtles. The Conflict Islands Conservation Initiative has been established as a science-based conservation initiative, focusing on tagging, monitoring, and protection and raising of hatchlings. Although the local community still harvests turtles and their eggs for food and trade, the programme is working to improve understanding on the need for conservation. The growing cruise ship industry may be an opportunity to further encourage turtle protection and management.

In other areas of PNG, education and awareness campaigns on marine turtle conservation, with an emphasis on the critically endangered leatherback turtle (Dermochelys coriacea), are being conducted through not-for-profit organizations such as Mas Kagin Tapani (MAKATA). However, these initiatives are limited by funding and legal enforcement.

The recent confirmation of the hawksbill turtle’s migratory paths between PNG and Australia is a further reminder of the shared responsibility in mapping the future of these animals. 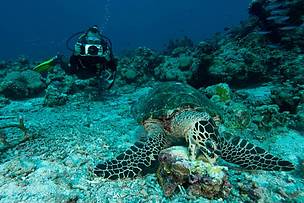 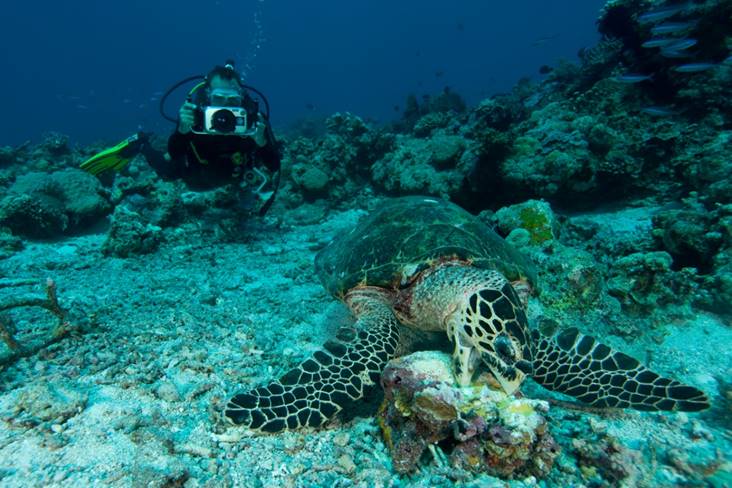