Water in the economy: a narrative for stewardship

World Water Day always prompts dire headlines. The word “crisis” will be used frequently, as will “billions” – as in, billions of people affected by water scarcity and without access to sanitation, and billions of dollars of economic activity jeopardized by poor water management. These make for interesting tweets, but can actually stymie action by making the problems seem too big to solve.

I am not saying the current state of water isn’t alarming. It is. But what we need is more discussion about the root of the problem and the workable solutions, and fewer numbing, sensationalist numbers.

The water crisis is a governance crisis. That’s the story, but it’s hard to tell in 140 characters. Focusing on big numbers can also lead to weak responses. It’s heartening to install taps and toilets, and it’s important to do so. But unless we address water governance, the taps will run dry and the sought after improvement in access to water will be a mirage.

We need to get better at turning the numbers into narrative – stories that show decision-makers the connections between water uses, the inevitable trade-offs and the possible solutions to our shared water challenges. Numbers drive attention, but they shouldn’t and usually don’t drive policy.

WWF is working in our priority river basins to ground the water discussion in the specific context. WWF-Zambia recently launched Water in the Zambian Economy: Exploring shared risks and opportunities in the Kafue Flats. Our goal was to quantify both the contributions of the Kafue Flats and social and economic dependence on this ecosystem. As expected, the numbers are impressive.

The Kafue Flats harbors the highest degree of multi-sectoral water-users in Zambia. We worked on this study – this story – with representatives from across the various sectors – hydropower, mining, agriculture, food and beverage – and with government representatives to ensure the data were matched with real perspectives and experience. The experience of contributing to the study helped these different sectors see themselves as characters whose plots are intertwined.

With so many competing demands, the plot is indeed thick. But seeing it captured as a narrative rather than a shocking headline helps inform meaningful discussions about allocations and trade-offs – essential if we’re to give the water story a happy ending. 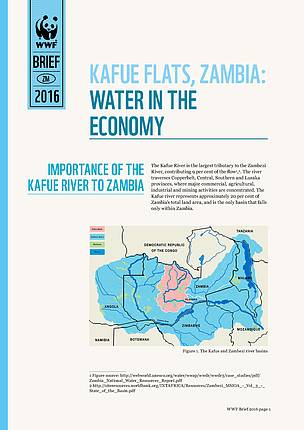 The Kafue Flats floodplain, in the northern section of Lochinvar, has been designated as a World Heritage Wetland Site by the IUCN and WWF under the Ramsar Convention. Zambia
© Martin Harvey / WWF The Kafue Flats floodplain, in the northern section of Lochinvar, has been designated as a World Heritage Wetland Site by the IUCN and WWF under the Ramsar Convention. Zambia
© Martin Harvey / WWF
Download
Water in the Zambian Economy: Exploring shared risks and opportunities in the Kafue Flats
PDF 3.45 MB
Zambia Kafue Flats Brief
PDF 1.93 MB
Share it
facebook
twitter
linkedin