With nearly two million inhabitants, Rajkot is a fast-growing city in the western Indian state of Gujarat. Rajkot’s hot, semi-arid summers make energy-efficient cooling of homes and businesses a necessity. As extreme temperatures become more common, Rajkot has embraced a national initiative to build new housing for residents and hopes to reduce CO2 emissions from the building sector. 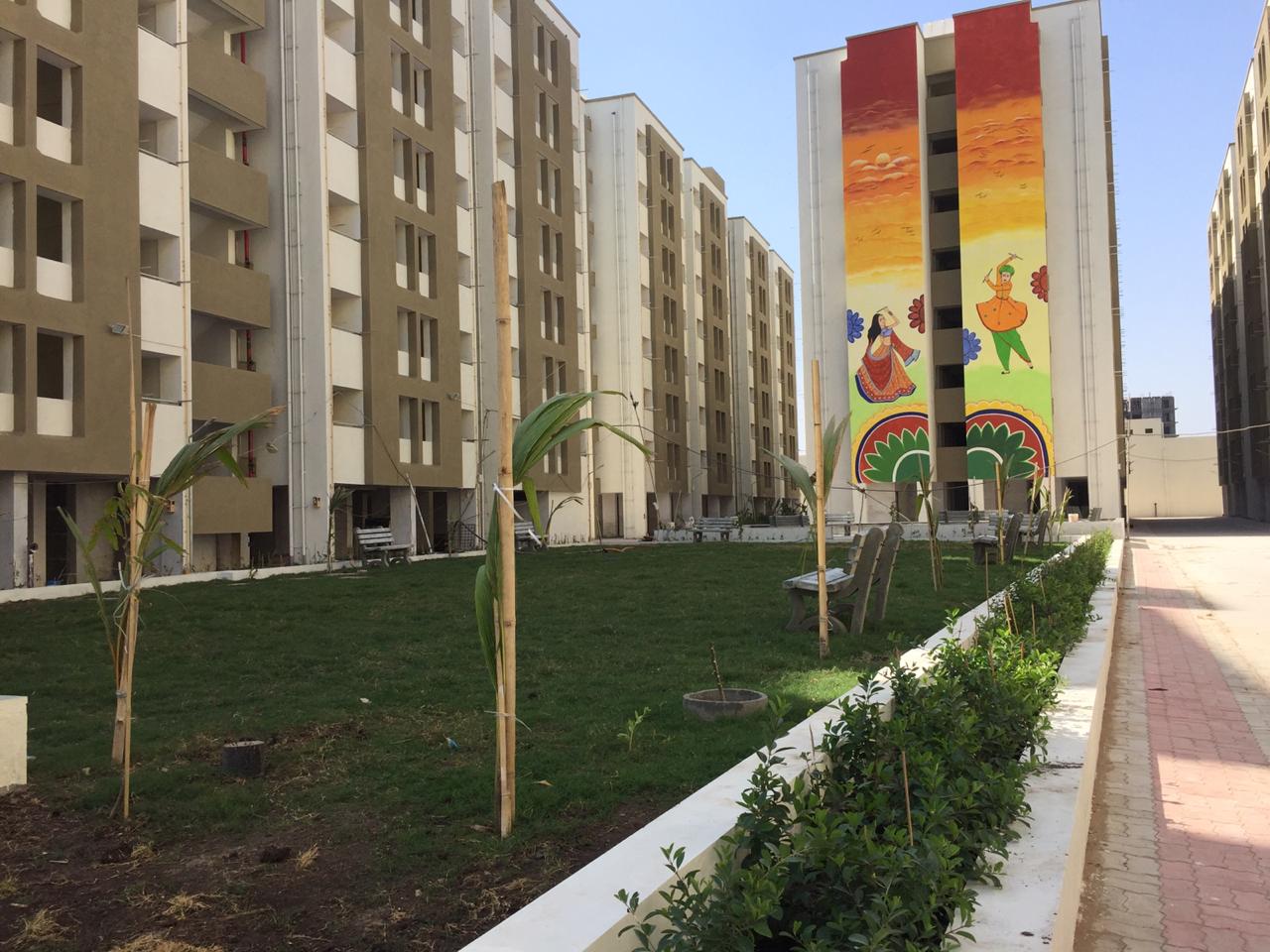 Fast-growing Rajkot has committed to reducing its carbon emissions 14% by 2023. To do that Rajkot must embed sustainability at the core of urban development. The city’s vacant land parcels represent an empty canvas that could be filled by well-designed neighborhoods and reliable, low-carbon transport alternatives.

Temperatures in Rajkot can reach up to 47°C in the summer, and the city has estimated that buildings’ indoor temperatures on a typical summer day can reach 38°C. This reality motivated the Rajkot civic administration to support the government’s Pradhan Mantri Awas Yojana (PMAY) goal to give citizens climate-friendly affordable houses. PMAY is one of the world’s largest, most ambitious housing schemes aiming to build 20 million affordable, eco-friendly houses by 2022. Thus far approximately 3.8 million living spaces have been completed. Residential buildings account for 25% of India’s energy consumption, with an expected rise to 38% by 2030 as cities grow. Currently each 1KW of electricity generation is estimated to produce 1kg of CO2 in India.
After the Rajkot civic administration decided to follow the lead of PMAY, a residential project called Smart GHAR III was initiated. Smart GHAR III served as a pilot to demonstrate affordable residences with thermal comfort and low energy consumption.
The city collaborated with experts from the Indo–Swiss Building Energy Efficiency Project (BEEP) to: analyze land characteristics where new units would be built; identify how temperatures could be lowered to increase indoor comfort; and facilitate low energy use. Final testing of finished GHAR III abodes showed indoor temperature peaks decreased by 6°C, and the number of hours where the temperature remained below 30°C increased, giving 1,176 families a better quality of life.
Rooftop solar is playing a part in Rajkot’s carbon cutting. The city deployed rooftop solar at GHAR III to operate elevators and street lights as well as overhead tanks to municipal supply lines.
New Smart GHAR III housing included green spaces, much needed in the city, as well as parking spots with electric vehicle chargers. Projects were located near supermarkets, schools, and other amenities used by families  to help residents avoid travelling long distances and reduce traffic. Created as an affordable housing project, residents paid half the construction price, while the city paid the other half. Nine similar projects are in the pipeline at locations around the city. The planned 930 acre development project in Rajkot called Raiya will use district cooling to eliminate individual air conditioners and keep emissions low.

Rajkot has improved its city’s cleanliness in national rankings by increasing waste collection, and has undertaken green initiatives to reduce its carbon footprint, including via mandatory rainwater harvesting.
Additionally, this year Rajkot will also get its first delivery of 50 electric buses, and plans to purchase 100 additional e-buses.
But the city must work harder to increase its green tree canopy for cooling and for green spaces for residents.  Rajkot also needs to further improve residents’ access to water and their ability to use it wisely – the city is one of 30 WWF has identified as facing ‘grave’ water risks by 2050.
Rajkot’s groundwater lies deep below the city, thus the city is engineering a new stormwater management system, and has installed water meters in residences and a leak detection system in the municipality. Secure delivery of water to residents is an ongoing challenge.