Through a 2-year project, the Microsoft – WWF-Vietnam partnership has brought positive changes to nature and people’s livelihoods in coastal lagoon areas in Thua Thien Hue province. Supported by WWF’s conservation expertise and wide network of local partners, Microsoft has been able to deliver its commitment to social responsibility: improving the lives of those most in need.

Every year, Thua Thien Hue suffers severe damage to agriculture and aquaculture farming, utilities infrastructure and facilities, due to progressively stronger storms and flooding resulted from climate change. During the past 2 years, with more than 23,000 mangrove trees planted and 400 households trained and adopting eco-aquaculture practice, people in the area now have more stable harvests, incomes, and safety. 
The everyday-life impacts of climate change

Like most people, the farmers in Thua Thien Hue province don’t know much about climate change. But each year, watching their homes and farms disappear into the storms, these farmers deeply understand the instability of their situation.

From their perspective, the term “climate change impacts” sheds its vastness and vagueness, unfolding in a simple definition: the insecurities of people’s livelihoods and the loss of their safety.

Climate change impacts mitigation, therefore, can essentially be narrowed down to the act of securing the livelihoods of people in vulnerable areas. Nonetheless, merely fixing the consequences of the storms is not a long-term resolution. Sharing the agenda of bringing positive changes to the world with innovative solutions, WWF and Microsoft took a more sustainable approach to the problem.


Partnership for a better future: when commitment to sustainability meets expertise in conservation

After intensive research and great consideration, WWF and Microsoft decided to tackle the consequences of extreme weather in Thua Thien Hue by replenishing the mangrove trees in Rú Chá forest, along the coastal areas of the Province.

Mature mangroves, thanks to their strong roots and tree limbs, are able to form secure walls that physically protects nearby communities from extreme weather. Secondly, they can effectively absorb carbon dioxide (CO2 – a greenhouse gas) from the atmosphere, and hence actively reduce climate change impacts.

Working closely with WWF’s local partner, The Association of Forest Science of Thua Thien Hue Province, the Microsoft – WWF partnership also developed an eco-aquaculture farming model in which farmers grow mangrove trees on their farms. The practice not only brings ecological benefits to the farms but also prevent people cutting down mangrove trees to build aquaculture ponds.

To further ensure the solution to have sustainable impacts, one key activity has been to train locals and build their capacity of mangroves management.

Mr. La Duy, from Van Quat Dong village, who has actively participated in mangroves plantation on his own farms, expressed his expectation in a better future. “It’s such a relief. It was nerve-racking every year when the storms came” said Mr. La Duy. “Now I feel more secured, with my fish ponds and surrounding areas protected by the growing trees.” With a well-designed training program for the locals, both Microsoft and WWF are confident that these achievements are here to stay. “This [the training program] not only creates the public awareness of the need to conserve the environment but also empowers them to do their part to protect the things they care”, said Mr. Francis Cheong, Senior Manager, Regional Sustainability, Microsoft.

This strategy has proved to create a significant behavior change in the local community. Before knowing the full benefits of mangroves to aquaculture practice, few people agreed to participate in the project; whereas now, more and more people become actively engaged in mangroves plantation and management.

“We have designed the project to not only be participatory but to effectively become part of the community itself” said Dr. Van Ngoc Thinh, Country Director, WWF-Vietnam. “As Microsoft and WWF share a commitment and strong desire to not only better the life of local communities but also make such betterment long-lasting.”

As the project’s first phase concluded on 31st July, a new campaign, “Recycle a phone, adopt a tree”, has been launched. For every phone returned for recycle, Microsoft pledges to plant one more mangrove tree in Thua Thien Hue. Besides reforestation purpose, proper treatment of the waste from electronic devices will reduce environmental harms.


An open opportunity for collaboration

As an old saying goes, “One swallow does not a summer make”: one single success, although with promising impacts, doesn’t reduce the vastness of climate change.

While WWF is optimistic about possibilities of climate change mitigation in Vietnam, there is, still, more work to be done and efforts to be made. We are, therefore, constantly looking for new opportunities and working with more corporate partners to address this pressing issue in Vietnam, progressing towards a better future for the country’s environment and people’s livelihoods. 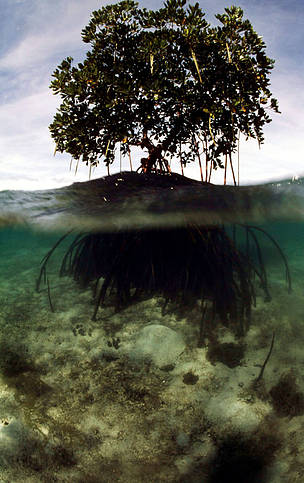 Mangroves build their own environment with its intricate root system that traps sediment.
© Jürgen Freund / WWF 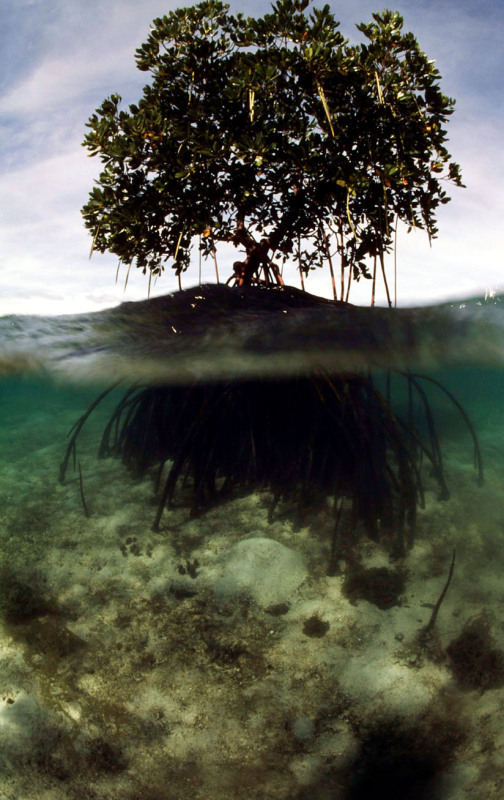